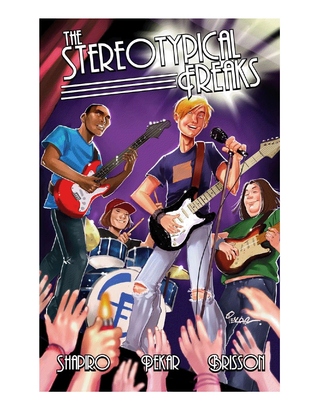 Four disparate high school seniors come together to compete in their school’s battle of the bands. Sharing a love for playing rock and roll, the members name the band “The Stereotypical Freaks” because they feel stereotyped by their classmates – smart kid, geek, star athlete and quiet weirdo… when in fact they know they are much more than those labels that have been placed on them. When one member reveals life altering news, winning the competition takes on more of a meaning to each member. Scared and angry, upset and yet still with a lot of resolve they set out to win one for the good guys… will they?


About the Author
HOWARD SHAPIRO lives in Pittsburgh, PA with his wife and two sons. The Controller for the Pittsburgh-based Visual Effects firm, Animal Inc., he has also written four children s books and The Stereotypical Freaks will be his debut Graphic Novel. His 2008 book, Hockey Player for Life, has been the number one downloaded children s hockey e-book on Amazon s Kindle chart since its arrival as an e-book in November of 2011. His, Hockey Days book was the only book featured in the December 2007 Sporting News Annual Gift Guide as a Best Buy Gift for Children. Through a corporate sponsorship program he set up (and maintains), since the 2010-11 season, both of his children s hockey books have been given to NHL teams (over 2,500 copies to date) for use in their community and educational initiatives. Since 2006 his annual charity raffle, which he matches dollar for dollar donated, has raised funds for several hockey-related charities including the Mario Lemieux Foundation, Hockey Fights Cancer and the Keith and Lisa Primeau Scholarship Fund. For more information, please log on to howardshapiro.net

Tom and Dan fool around in the basement playing along to their favorite music.  While Tom (smart kid) can sing and play keyboards, Dan (geek) is a kick ass bass player, but they are missing a guitar player and drummer.  Tom’s dad sits in with them every once in awhile but with a battle of the bands coming up at the high school, they really want to get their act together and perform.  Tom’s best friend while growing up is an excellent guitar player but he is busy trying to get a football scholarship.  When Tom starts to tutor Marcell, now known as Mark (jock), he reconnects with him and convinces him to play.  Jacoby (quiet weirdo), a new kid at the school, loves to play drums, but he has scheduling conflicts that prevent him from practicing.

The group really starts to come together and each member seems to have a secret reason for wanting this band to succeed.  The story covers a range of emotions and attitudes, from bullying, secret crushes and illness.  When Jacoby admits he is suffering from incurable cancer, the guy really rally around him and don’t realize how much the performance means to him until they visit him at home right before he passes away.  (Big Sob).  The whole story is very sweet without being saccharine.  It is the type of book that gets the point about how we should treat each other and doesn’t get all preachy.  I loved the graphics that went along with the story and you get an even better feel for the characters.  I don’t think the story would have worked as well had it not been manga.

I was fascinated with the excellent choice of music that Shapiro put together with each chapter.  It really captured the mood and setting. The author is kindly letting me list the music here so you can get a feel of the range of emotions the story covers.