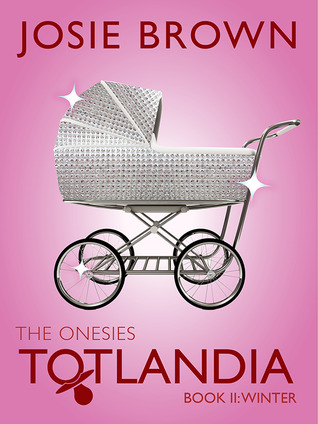 In this second book of the Totlandia series, five mommies are just one misstep away from entry into the elite Pacific Heights Moms & Tots Club. Everyone has a scandalous secret to hide, but who will be the next to fall?

As the club’s founder, Bettina, ratchets up the stress level with a series of holiday-themed challenges, the cracks begin to show. Jade’s past catches up to her in the most unlikely of settings. Jillian’s struggles to make ends meet are complicated by Bettina’s demands. Ally’s work and home lives collide, threatening to expose all of her secrets. And Lorna’s already fraying family ties are torn to shreds by a series of devastating events.

With just four spots remaining, will the five remaining ladies turn cutthroat? Or will their newfound friendships be strong enough to help them band together?
http://www.totlandiatheseries.com

About the Author
Josie Brown is the author of SECRET LIVES OF HUSBANDS AND WIVES (Simon & Schuster), which will be made into a dramatic television serieson NBC, produced by Jerry Bruckheimer.

For more on Josie, visit her website: josiebrown.com and her blog: authorprovocateur.com

Book Two picks right up where Book One left off, as the five remaining mothers vie for four spot in the Pacific Heights Moms & Tot’s Play Group.   Now, with the secrets starting to spill between the four friendly ones, each now knows a bit more about the others.  Jade’s pole dancing comes to light when Bettina’s husband recognizes her, although she already let that cat out of the bag to the others.  Jillian’s divorce is still a bit under wraps but after she waits on Lorna and Bettina, she had to admit to the group that she is in dire straights.  Lorna, herself has finally admitted her own secret, well, at least to her husband about her son’s condition and she has been an a pillar of support for the others even while she is the victim herself of viscous rumors.  Ally admits that she is not married and uses her gay best friend as a front for the group.

As Kelly tries to manipulate Bettina towards the finish through the Thanksgiving holiday, she herself gets played much like a great episode of Survivor.  I so enjoy this series and I am always stunned a bit sad when each book ends.  At least there are more books to be released every three months, so the countdown is not that long.  These stories are the perfect read to take along on your smart phone since each chapter can be easily read while waiting.  I think it took me about two hours to get through this one.  I swear I feel like a junkie with Josie Brown and I just can’t get enough of these characters.