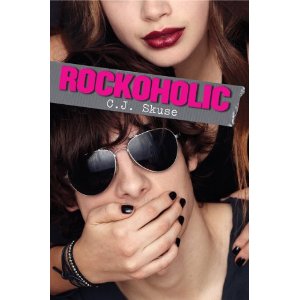 Gonna have to face it: Jody’s addicted to Jackson Gatlin, frontman of The Regulators, and after her best bud Mac scores tickets, she’s front and center at his sold-out concert. But when she gets mashed in the moshpit, loses her precious moon rock, and bodysurfs backstage, she ends up with more than a mild concussion to deal with. By the next morning, the strung-out rock star is coming down in her garage. Jody — oops — kind of kidnapped him. By accident. And now he doesn’t want to leave.

It’s a rock-star abduction worthy of an MTV reality series . . . but who got punk’d?!

About the Author
C.J. SKUSE loves graphic novels, ’80s sitcoms, Gummi Bears, My Chemical Romance, and malamutes. She hates omelettes, carnivals, and coughs. She has an MFA in Creative Writing from Bath Spa University in England. BCCB called her novel PRETTY BAD THINGS “a fast-paced action adventure [that] provides a subtle sociolgical study of the effects of living in a hyper-mediated culture”! ROCKOHOLIC is her second book.
SOURCE:  NETGALLEY – PUBLISHER

Bristol teen, Jody,  has a major crush on US rock star Jackson Gatlin.  She has his posters plastered on her wall, eats what he professes to eat and just generally fangirls out at his concerts.  Her best friend, Mac, wants to be on Broadway star and genially puts up with her Gatlin rants with a stoic front.  They spend most of their time together at his family’s pub and taking care of his little sister, Cree while his parents work.  Her divorced mother has moved the family in with her father and Jody develops a special relationship with her grandfather.  When he passes away, Jody is left bereft and slowly spins out of control.  The only bright spot in her life is seeing Gatlin’s band preform, so when she angers her mother and her mother in turn rips up Jody’s ticket to the show, things get desperate.

Mac graciously gives Jody his ticket and even drives her to the show, even waits for her to finish.  When she ends up injured at the concert, Mac tracks her down and finds her with Jackson, in a bizarre and accidental kidnapping.  They find that Jackson doesn’t want to go back to his band and evil manager and also has a horrible drug addiction to uppers and downers.  So what is super fan Jody do?  She takes him home to nurse him, hiding him in her grandfather’s garage and rehabing him.  What ends up happening in the story is truly heartwarming, bittersweet and funny enough to make this one of my favorite reads of the year.

Although the characters are in England, this story should resonate with any young adult just coming of age and trying to deal with what they want to do with their lives.  The fact that Jody is so clueless about Mac’s feeling for her really was a sweet moment when she realizes that Mac is and has been in love with her forever and it is the right kind of love.  Both of them have families with major issues and the fact that these two aren’t more messed up is amazing.  Parents: there is language, some kissing, alcohol mentions, drug abuse.  Please note that this book takes place in England where the drinking age is different.  The drug abuse is shown in a bad light.