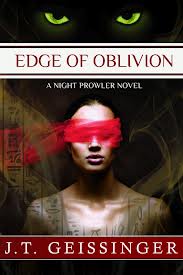 Release Date: October 2, 2012 | Series: A Night Prowler Novel #2 (Book 2)
Edge of Oblivion reunites readers with the Ikati, a race of beautiful, savage shape-shifters who live hidden from the everyday world, the rebel within their ranks who will risk everything for a chance at freedom, and the brooding assassin who might end her life…or lay claim to her soul.Morgan Montgomery is waiting to die. Branded a traitor by her tribe, the Ikati shape-shifter has no hope for mercy–until Jenna, the Ikati’s newly crowned queen and Morgan’s former ally, offers one last chance for redemption. Morgan must infiltrate the Rome headquarters of the Expurgari, the Ikati’s ancient enemy, to destroy them once and for all. The beautiful renegade has just a fortnight to complete her mission or forfeit her life. Because she does not travel alone…
Xander Luna is a trained assassin and the Ikati’s most feared enforcer, famed for his swift brutality and stony heart. Fiercely loyal, he is prepared to hate the traitor under his watch–until they come face to face. For Morgan arouses something unexpected inside of him, something that threatens everything he believes in and the fate of the tribe itself: a love as powerful and passionate as it is forbidden.

About the Author
J. T. Geissinger is an author, entrepreneur, and avid wine collector. Her debut novel, Shadow’s Edge, book one of the Night Prowler Novels, was published in June 2012, and she is at work on a third book in the series. A native of Los Angeles, she currently resides there with her husband and one too many cats.

Even though I didn’t have a chance to read the first installment of this series, I wasn’t left with a lot of gaps since this one takes on the new characters of Morgan and Xander.  Morgan is an Ikati, a shape-shifting panther that has been exposed as a traitor to her tribe by allowing humans to attack the Queen. Now newly named Queen of the tribe, Jenna, gives Morgan a chance at redemption and an escape from the prison she finds herself in.  She must track down the headquarters of the Expurgari in Rome.  Xander is tasked with killing her if she fails to locate it.

There is a lot of back story to Morgan and her betrayal and the fact that she probably wouldn’t have done it if she knew Jenna was going to change the fate of women in the tribe as being submissive to the males.  Following Morgan through Rome as she comes up against the Expurgari.  Xander and Morgan find an instant attraction but try not to get close since they know if she fails, he must kill her.  That puts a whole new twist on the romance. I enjoyed the fast paced action and sexual tension between the couple, but really wish I had read the first one to get the full background on the race.