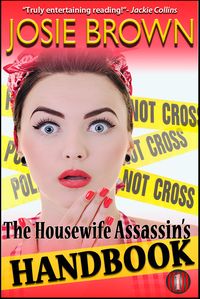 Murder. Suspense. Sex. And some handy household tips.Every desperate housewife would love an alias. Donna Stone has one, and it’s government sanctioned. Oh sure, you need to be ruthless to take on Russian mafia bosses, rogue dictators, and terrorists set on destroying the world. But it takes real killer instincts to survive suburbia. Try juggling the fifth grade phone tree during a shootout with skinhead arms dealers, or driving carpool while being chased by Chinese double agents.Donna’s life wasn’t always this complicated. Five years earlier she was just another woman with two preschoolers, a baby bump, and an adoring husband: Carl, with whom she lived happily ever after in a McMansion in the Orange County, California community of Hilldale. But Donna’s life was changed forever the night she delivered her baby: Carl’s car blew up on the way to the hospital.Turns out Carl was an assassin for a black ops organization known as Acme Industries. The hit on Carl was carried out by the Quorum, a terrorist cell he was tracking. The Quorum’s motto: “Show me the money.” Governments do as they’re told—or suffer bloody consequences.Carl left something behind that the Quorum wants badly. To protect herself and avenge Carl’s death, Donna joined Acme. Whereas her hostessing skills rival Martha Stewart’s, her marksmanship is second to none.A good thing, too, because the Quorum has planted a sleeper cell in Hilldale. For Donna, that’s too close for comfort. Will she be able to save her family before the Quorum blows up Los Angeles?Acme’s way of flushing out the Quorum is by “bringing Carl back from the dead.” But terrorism makes strange bedfellows–and brings new meaning to that old adage “Honey, I’m home…”
YOU CAN READ MY REVIEW HERE

SECRET LIVES OF HUSBANDS AND WIVES (Simon & Schuster), which will be made into a dramatic television series for ABC by producer Jerry Bruckheimer.

Non-Fiction Books by Josie Brown:
As a journalist, Josie’s celebrity interviews and relationships trends articles have been featured in Los Angeles Times Syndicate International, Redbook and Complete Woman magazines, as well as AOL, Yahoo, AskMen.com, Divorce360.com, and SingleMindedWomen.com.
WANT TO WIN ONE OF THREE COPIES OF THIS eBOOK?
Complete the below form
Contest is open to anyone over 13 years old that can access Kindle books
Void where prohibited.  See the complete rules HERE
Contest ends on 12.2.12 Winner will be chosen by Random.org
Winner will have 48 hours to respond to email.
Only one winner per mailing address.  Multiple entries will be deleted.
This giveaway is sponsored by the author and THREE eBOOKS are available.
Follow Me