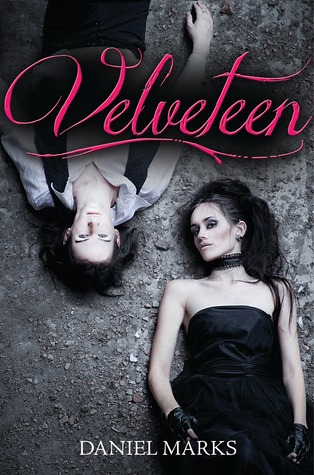 Release Date: October 9, 2012
At sixteen, Velveteen Monroe was kidnapped and murdered by a madman named Bonesaw. But that’s not the problem.
The problem is she landed in the City of the Dead. And while it’s not a fiery inferno, it’s certainly no heaven either. Grey, ashen and crumbling more and more by the day, and everyone has a job to do there. Which doesn’t leave Velveteen much time to do anything about what’s really on her mind.
Bonesaw.
Velveteen aches to deliver the bloody punishment he deserves. And she’s figured out just how to do it. She’ll haunt him for the rest of his days.
It’ll be brutal…and awesome.
But crossing the divide between the living and the dead has devastating consequences. Velveteen’s obsessive haunting could actually crack the foundation of her new world, not to mention jeopardize her very soul. A risk she’s willing to take—except fate has just given her reason to stick around: an unreasonably hot and completely off-limits coworker.
Velveteen can’t help herself when it comes to breaking rules . . . or getting revenge. And she just might be angry enough to take everyone down with her.

DANIEL MARKS writes young adult horror and fantasy, spends way too much time glued to the internet and collects books obsessively. He’s been a psychotherapist for children and adolescents, a group home counselor for the chronically mentally ill and a Halloween store manager. He’s survived earthquakes, volcanoes and typhoons to get where he is today, which is to say, in his messy office surrounded by half empty coffee cups. He lives in the Pacific Northwest with his wife, Caroline, and three furry monsters with no regard for quality carpeting.

Velveteen dies at the hands of a serial killer and finds herself in purgatory.  She learns she ends up in the City of Dead, an ashy and dark place, since she has unfinished personal issues.  She knows what those issues are:  she wants her killer dead.  The City of Dead has it‘s own issues and is experiencing Shadowquakes that are ripping the town apart and they are caused by a spirit not going where it is supposed to.  As Velvet tracks down these ghosts with her Salvage team, she finds rips in the fabric of the City that allows her to visit her killer on earth and haunt him.  This may or may not be also causing these quakes.

As Velvet reclaims a lost soul, Nick, someone close to her age that she developes the hots for and with good reason. Nick, it turns out has an aptitude  for salvage work and helps Velvet out in more ways than just salvage.   As the pair unravel the unraveling of the City of Dead, it seems that there is a revolution in the works that claims souls are being forced to stay in the underworld way past their time.  Of course a war errupts and you end up wondering if Velvet and Nick can save everything including protecting earth from a multitude of ghostly hauntings by demons.

The world building seemed to take forever and the supporting characters are all wonderfully drawn. I enjoyed the interplay between Nick and Velvet but the whole plot was just really slow.  The ending part really made up for that though and I even think I got a HEA.  The whole build up to the end certainly made that worth getting there.  I think since everything is set up I would enjoy another installment.  Parents:  some violence, some language.