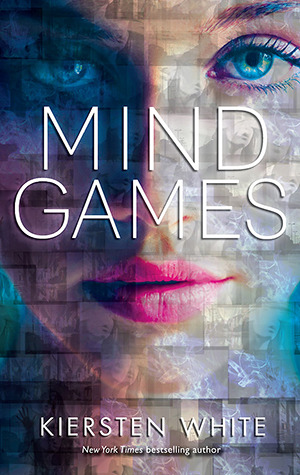 Release Date: February 19, 2013 | Series: Mind Games
Fia was born with flawless instincts. Her first impulse, her gut feeling, is always exactly right. Her sister, Annie, is blind to the world around her—except when her mind is gripped by strange visions of the future. Trapped in a school that uses girls with extraordinary powers as tools for corporate espionage, Annie and Fia are forced to choose over and over between using their abilities in twisted, unthinkable ways… or risking each other’s lives by refusing to obey.In a stunning departure from her New York Times bestselling Paranormalcy trilogy, Kiersten White delivers a slick, edgy, heartstoppingly intense psychological thriller about two sisters determined to protect each other—no matter the cost.

About the Author
Kiersten White is the New York Times bestselling author of Paranormalcy and Supernaturally. She has one tall husband and two small children. She lives near the ocean in San Diego, where her days are perfectly normal. This abundance of normal led her to a fascination with all things paranormal, including but not limited to faeries, vampires, and pop culture.

Fia, short for Sophia, and her sister, Annabelle,  have been abandon by their aunt to a special boarding school where they have been offered a full scholarship.  With their parents dead and their aunt constantly traveling, the girls are have been on their own for the last few years.  The school they attend uses the girls for their special gifts.  Anna can see others in her mind and even though she is blind, she can picture the future perfectly.  Fia can always make the right choice whether it is a killing in the stock market or the perfect way to kill someone.  Their lives come tumbling apart when Fia cannot follow though on a plan to kill someone.

In her short life, Fia has killed several times and she should have been able to kill Adam without hesitation but then he deviates from her plan and becomes human by showing concern for her.  Adam has his own strange history as a medical prodigy, he is trying to map the brains of girls just like Fia to discover why they have such unique abilities.  James Keane is the son of the man that forces the girls to a life of crime although he has some dark secrets of his own.  Fia dumps Adam and tells Keane everything went according to plan and forces Anna to lie about it as well.  When Fia has had enough, she tries to escape but knows that Keane’s father will kill Anna if she leaves.

I read this book in one sitting and it reminded me a bit of La Femme Nikita with lots of running, action and violence.  Fia and Anna share a strong bond and the bad guys use it to their advantage.  There are a few surprising twists and turns in the story that made me really feel for Fia and the fact that she is so alone. It is told in alternating points of view between Anna and Fia which really added to the background. Also, there are lots of flashbacks to explain things.  The smart and snappy dialogue is all there, just like Paranormalcy as well as the non stop action.  Parents:  there is a lot of violence, drinking and kissing.