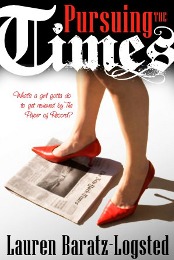 Publication Date: August 24, 2012
All that popular Chick-Lit author Mercury Lauren wants is to have one of her books reviewed by the New York Times Book Review – just one – and she’ll do almost anything to get it. In this contemporary romantic comedy, with a nod toward Pride and Prejudice she crosses swords and hearts with the Editor-in-Chief of the NYTBR in a madcap adventure that takes her from her home in Westport to a yoga retreat to a golf course in Florida. Will she get what she wants and will she finally be happy if she does? Only one thing’s for certain: nothing will stop her from Pursuing the Times.

I was an independent bookseller and buyer for 11 years before deciding to take a chance on myself as a novelist. While trying to sell my books, I worked variously as a Publishers Weekly reviewer, a freelance editor, a sort-of librarian, and a window washer. My first novel, The Thin Pink Line, about a woman who fakes an entire pregnancy, was published by Red Dress Ink in 2003 as their own first-ever hardcover. It was published in 11 countries and was the first book from any Harlequin imprint ever to receive a starred Kirkus review. I’ve since had over 20 books published for adults (Vertigo), teens (The Twin’s Daughter) and children (The Sisters 8 series, created with my husband and daughter). Recently, I’ve published a few ebooks as well, including a comedic romance for adults, The Bro-Magnet. I live in Danbury, CT, with my wonderful husband Greg and my equally wonderful daughter Jackie.

Mercury, named after a football player and the fact that her father loved the color silver, is a successful author.  For some reason, her witty, comedic books have struck a chord with chick lit fans.  That may be that her books are published by Pink Pet, a known source of all things chick lit.  She rants to her agent and high school BFF, Angel, that the New York Time Book Review will have nothing to do with her books, even though they are best sellers and her readers adore them.  I immediately thought of Jennifer Weiner and her issue (rightly) that the Times didn’t really cover women authors.  Angel also reps Nick, this year’s National Book Award winner.  His best friend is Frank, editor in chief of the vaunted NYTBR.  Even before Mercury knows who he is , she lays into him with a drunken rant.  When she figure out who Frank is, she would like to turn invisible.

In the meantime, her brother, Ralph,  has been thrown out by his wife and moves in with Mercury and Nick tags  along. Oh and Nick and Frank were college buddies with Ralph.  Mercury was never one to shy away from arguing her point, so she sends Frank an offhanded apology, never expecting to her back from the guy.  And thus begins an almost stalky type of relationship.  She gets it into her head that she must get Frank to read her book and follows him to Florida where he is playing golf with Nick.  Ah, and here comes the hot part:  a seriously hilarious and hot romance that hits the sheets with strawberries and whip cream.  Parts of it were extremely sweet but I couldn’t help but laugh out loud at certain points in this comedy of errors.

Fans of Jane Austen will easily pick up on the wit and and dynamics of these characters and their relationships that are  much like Pride and Prejudice.  I loathed the  fact that all of the men in Mercury’s life had very strong opinions about her books, yet not one had bothered to read one.  Mercury definitely has a way with words, even if they are the wrong ones at times.  The fact that Baratz-Logsted pointed this out filled me with glee! I adore my chick lit and this one is at the top of my favorites to recommend right now.  The dialogue is warm and witty, full of snark and sarcasm and that is really what makes a book stand out for me. If you enjoy Jennifer Weiner or Sophie Kinsella, you are going to really enjoy this one.