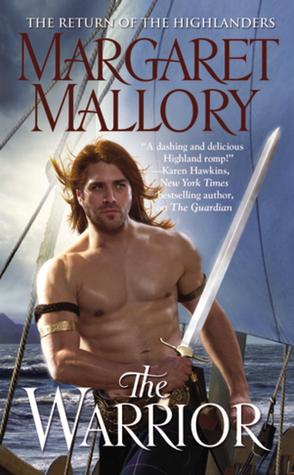 Publication Date: October 30, 2012 | Series: The Return of the Highlanders (Book 3)
From the Isle of Skye to the battlefields of France, Duncan MacDonald has never escaped the memory of the true love he left behind. Deemed unworthy of a chieftain’s daughter, Duncan abandoned the lovely Moira to prove his worth in battle. Now, when called upon to rescue her from a rival clan, one thing is certain: Moira’s pull on his heart is stronger than ever.

Bartered away in marriage to a violent man, Moira will do anything to ensure she and her son survive. When a rugged warrior arrives to save her, the desperate beauty thinks her prayers have been answered-until she realizes it’s Duncan. The man who once broke her heart is now her only hope. Moira vows never again to give herself-or reveal her secrets-to the fierce warrior, but as they race across the sea, danger and desire draw them ever closer.

Margaret Mallory is the author of the Scottish historical series, THE RETURN OF THE HIGHLANDERS, and the medieval series, ALL THE KING’S MEN. Her books have won numerous honors, including the the National Readers’ Choice and Maggie Awards for best historical romance of 2011. Margaret’s second novel was a RITA© finalist, and her last four books have all received 4 ½ stars–three of them Top Picks–from RT Book Reviews.

M argaret lives with her husband in the beautiful but damp Pacific Northwest, which looks a lot like parts of the Scottish Highlands. Now that her children are off on their own adventures, she spends most of her time with her Highland warriors, but she also loves to read, watch movies, hike, and travel. Visit her website for book group questions, photos of Scotland, reviews, blurbs, and historical tidbits. Margaret loves to hear from readers!

Moira falls in love with Duncan as a teen and Duncan returns that love but realizes she is above him in class and there is no future for them.  So when Duncan departs to fight in France, Moira is left at home and pregnant with his son. Her father marries her off to another clan ruler, Sean, who beats and abuses her since she is longer near her family and their protections.  With only a wolfhound to protect her and her son against Sean, he forces Ragnall to choose between the dog or his mother.  Right then, Moira plans to escape.  Let’s just say it doesn’t end well for Sean.  Duncan shows up right on schedule, although Moira would rather it be the devil to save her.

Even more devastating is that Moira must leave Ragnall with another clan leader for protection.  Of course, there are a few battles and arguments between the pair before they realize that they are meant for each other as well as some family issues that must be cleared up before they can be together.  The true hero of this book is Sar, the wolfhound.  Big Sigh.  I fell in love with this dog as it protected Moira from evil men and even a wolf attack. Although Moira had her moments of not thinking clearly, she always put her son first and over came the circumstances of being a lady in the 1500‘s.  As I turned the last page, I thought: I would be so happy if it ended right here.

Even though this book is part of a series, it stands alone.  I know I have read others in the series and a few of the characters cross over but you won’t get lost in any way.  Overall, this is one fun read and filled with romance of Highlanders.