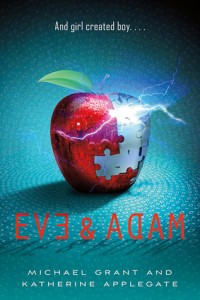 Release Date: October 2, 2012
And girl created boy…In the beginning, there was an apple—And then there was a car crash, a horrible injury, and a hospital. But before Evening Spiker’s head clears a strange boy named Solo is rushing her to her mother’s research facility. There, under the best care available, Eve is left alone to heal.Just when Eve thinks she will die—not from her injuries, but from boredom—her mother gives her a special project: Create the perfect boy.Using an amazingly detailed simulation, Eve starts building a boy from the ground up. Eve is creating Adam. And he will be just perfect… won’t he?
About the Authors
KATHERINE APPLEGATE is the author of many books for children and young adults, include the award-winning Home of the Brave. Her husband, MICHAEL GRANT, is the author of the BZRKseries and the bestselling Gone series. Together they wrote the popular Animorphs series. They live in Northern California with their two children and numerous unmanageable pets.

Evening Spiker is hit by a trolley car and her leg is ripped off, she is near death when her mother, Terra,  forcibly removes her from the hospital to be taken to her biotech research facility near San Francisco. E.V. doesn’t really relate to her mother and since her father was killed in a car accident, she pretty much has fended for herself. In the care of one of her mother’s employees, Solo, Evening finds him a strange boy.  With only Solo for company, she becomes bored and sneaks her BFF, Aislin into the facility. To relieve her boredom, Terra gives Evening a project to play with where she can create the perfect boy.  Since her mother hates Aislin, E.V. as she is known to her friends, must pretty much uses blackmail to permission for her to visit.   The only problem is that the program really works and it is not just a virtual playground as E.V. first imagined. She has named her creation Adam, not realizing that he is real.

The story is told from the view point of both Eve and Adam and you really start to wonder if Adam is too stupid to live, but that idea is soon dispelled as he begins to gain knowledge.  Solo has confide to Eve, as he calls her, that her mother is not exactly above board with her research and he tries to convince her that she needs to expose her mother’s company for the reprehensible part of the research.  Eve realizes that her mother also does a lot of good.  So with help from Aislin, Eve sets of to uncover the truth and gets sucked into the controversial and grey area of bio-tech research.

The story is fast moving and set in current times, so all of the science parts of the story probably do exist to some extent.  You are quickly drawn into Eve’s world and the reasons for her confusion and remorse over her mother’s company.  As she delves further into the background of the company, Eve finds she is connected to Solo in more than one way.  I really enjoyed the story so far but I was left hanging, so I guess there must be a follow up in the works.  Parents:  there are mentions of drug and alcohol use, some language, some kissing, so it is probably best for teens.