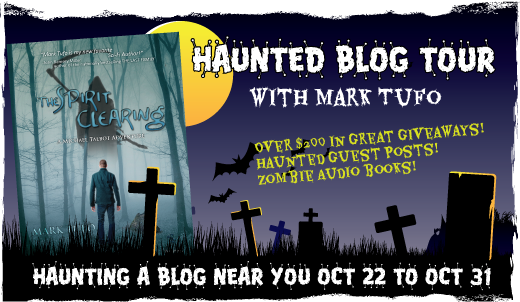 Hello fellow ghosts and ghoul hunters! Welcome to Mark Tufo’s Haunted Blog Tour. The Haunted Blog Tour will be a ten day chill fest that will take you from one Haunted Blog to another! Today is the ninth day of our Haunted Blog Tour…and it looks like it is coming to a close. Our host for this adventure, THE SPIRIT CLEARING’s Michael Talbot is currently guiding a very scared group of people through a very haunted penitentiary. Read his adventure and don’t forget to enter the giveaways. Along the Haunted Blog Tour you will have a chance to win Michael’s twisted story along with some other very exciting prizes (don’t get too excited it is only – over $200 in awesome prizes)! But, let’s get back to Michael Talbot…maybe now they’ve found the exit…

“What if they need help?” Alan asked.
“Altruism is greatly over-rated.” I told him.
The door silently swung open, which was strange in itself because it had moderately squealed when we got Derek out. A bone white arm shot out.
“Oh shit!” I said startled.
“What?” Jed asked.
“Really?” I asked Jed. “You don’t see that?”
“I see the door opening.” He said staring hard at the door.
The arm moved further out. The top of the hooded girls head poked out.
“Nobody sees this?” I entreated to the crowd.
“Same as Jed.” Trip S said, just an open door, probably wasn’t shut all the way or it was busted.
Hoodie girl had pulled herself half way out when she finally looked up. That was at the point I guess I had gone insane, she had no face, no eyes, no ears, no mouth and no damn nose. It was as flat and smooth as if someone had taken a belt sander to her features and erased them from her countenance.
“Jed point the friggen way man, we gotta go!” I yanked him and put him in front.
He couldn’t see what I did, but he could pick up on my terror easy enough considering it was coming off me in sheets.
We were out of the morgue proper when I heard something wet plop down against those cold ceramic tiles behind us.
It was a good hundred feet as we raced (okay shuffled fast) to the exit. It was difficult traversing the hazards strewn throughout the hallways.
“Something’s coming.” Peter said.
“Can you see it?” I asked not daring to turn around and impale myself on some exposed rebar.
“No but I can hear it.” Fear was finally creeping into his voice.
Then came a blood-curdling scream (and it wasn’t from me). I turned so had Jed, somehow he had got the light back and was quick enough to catch Trip S being hurled against the wall. His head slammed off the concrete and shattered much like a melon would under Gallagher’s mallet (hope that reference isn’t too old – look it up on youtube). Blood cascaded down all around us.
“RUN!” I yelled stooping to grab something, anything, ended up with an old walker, not a very formidable weapon when dealing with specters.  It was too late for Trip S, parts of him were dripping down the wall.  He would never shop the boy’s department for clothing again. We were within 20 feet of the exit and the thing behind us still hadn’t shown itself but it was gaining.   Unfortunately I couldn’t see it.
Jed’s light was bobbing up ahead as he made great time, something snapped in half not a stride from me, I turned wanting to face my demise instead of being shredded from behind. I figured I could delay it just long enough for the rest of the group to get free.  I was slightly dismayed that Goth couldn’t share this moment with me but can’t have everything I suppose. I swung my aluminum walker not hitting anything.  It did however make a cool whooshing sound as its sliced through the air.
In my peripheral vision I realized that the flashlight was not moving anymore, I turned as much as I dared to see what was keeping us from our forward momentum, I nearly dropped my weapon of mass destruction. The flashlight was on the ground spinning and the group was gone.
“What?” I asked trying to figure out what had happened.
The light came to rest pointing back the way we had come.  Faceless was staring back at me, no more than a foot away. I’m sorry, I’m a big bad ass former Marine but I was screaming like a little girl those last ten feet as I pushed through the exit door.
I ran ten more feet before the biggest blackest bestest friend in the whole world grabbed me.
“Whoa Talbot man you alright?”
“BT, BT is that really you?” I asked reaching up and touching his face.
“You gonna be taking me to dinner now?”
“It is you.” I said hugging the giant.
“What the hell is going on here? I got your text, so I called your wife. Tracy said you left some cryptic message about leading some group down here on a tour.”
“Yeah, yeah, I’ll explain maybe let’s just get a little further away from this place first.” I told him.  It looked like the door might be opening up ever so slightly.
“Yeah but Talbot, your missus she checked the name of the paranormal group you said you were leading there’s no such group. And certainly not walking through Eastern State Penitentiary, it’s condemned, no one is allowed in there anymore.”
“Wait….what? So I’m not getting my two hundred and fifty bucks?” I asked him.
“I don’t think you’re getting it man, there’s no paranormal group and certainly no tour.”
“BT I just spent the last hour or so in that effen place, I can assure you there was both.”
“Talbot I’ve been trying to find you for 24 hours, Tracy most likely has the National Guard on the way.
“I’d rather have Marines.”
“Are you alright, my friend?” BT asked stooping down to look carefully into my eyes.
“I don’t think I’ll ever be alright BT.” I told him as we walked away from my latest waking nightmare. 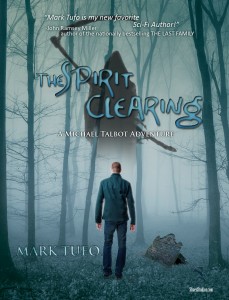 ABOUT THE BOOK
Title: THE SPIRIT CLEARING
After a horrific accident Mike wakes to find himself blind in one eye. He now sees things that others can’t and nobody will listen to him.
That is until he meets Jandilyn Hollow. Will she be able to pull him out of the depths of his despair?
Can love transcend even death?
About The Author

Mark Tufo is the author of several books, including Indian Hill, Indian Hill 2: Reckoning, and Timothy. A graduate of the University of Massachusetts Amherst, he is a former member of the U.S. Marine Corp. Mark lives in Maine with his wife, three kids and two English bulldogs.  You can find Mark at www.marktufo.com or on Facebook. 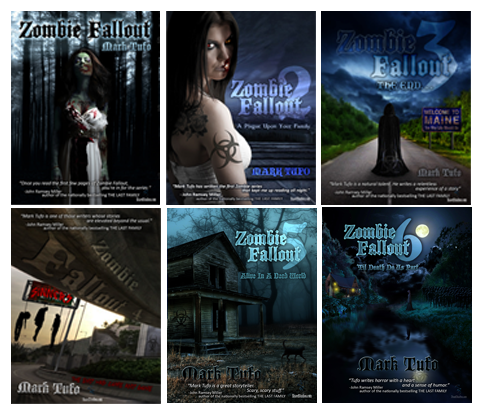 YOU CAN WIN A COPY OF THE SPIRIT CLEARING by Mark Tufo,
BY COMMENTING ON THIS POST
AND ANOTHER ENTRY BY ANSWERING THIS QUESTION:

What military branch did Talbot serve?