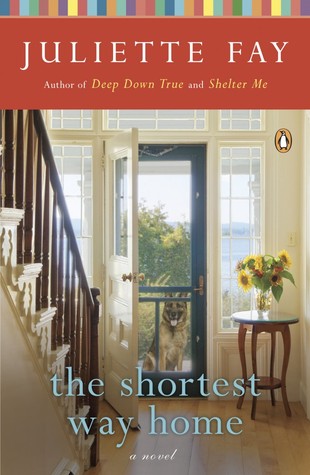 Release Date: October 30, 2012
A NOVEL FULL OF HUMOR AND HOPE FOR FINDING YOURSELF WHERE YOU LEAST EXPECTED

Sean has spent twenty years in Third World war zones and natural disaster areas, fully embracing what he’d always felt was his life’s mission. But when burnout sets in, Sean is reluctantly drawn home to Belham, Massachusetts, the setting of Fay’s much-loved Shelter Me. There, he discovers that his steely aunt, overly dramatic sister, and quirky nephew are having a little natural disaster of their own. When he reconnects with a woman from his past, Sean has to wonder if the bonds of love and loyalty might just rewrite his destiny. Completely relatable, The Shortest Way Home is another perfect serving of a slice of life from the irresistible Fay.

About the Author
Juliette Fay’s first novel, Shelter Me, was a 2009 Massachusetts Book Award Book of the Year. Her second novel, Deep Down True, was short-listed for the Women’s Fiction Award by the American Library Association. She received a bachelor’s degree from Boston College and a master’s degree from Harvard University. She lives in Massachusetts with her husband and four children.The Shortest Way Home is her third novel.
SOURCE:  PUBLISHER
MY THOUGHTS
LOVED IT
Sean’s mother died young of Huntington’s Disease, something he has a 50-50 chance of inheriting.  As a nurse who has devoted his life to helping those in need in the most desperate of areas, he is now burned out and heading home, something he has avoided through his good deeds. When he arrives there, he realizes that his aunt Vivian might have dementia or Alzheimers while his sister, Deidre, is clueless while she tries to be an actress.  His nephew, Kevin, has his own issues, mainly he is raising himself because his mother is so self-absorbed.  As Sean connects more with Kevin, a friend points out that his nephew may be suffering from a disease himself, possibly a sensory processes disorder.  Sean promises to himself that he will only stay until he gets his family in order.

Although, Sean is now at age where he may have dodged the Huntington bullet, he wonders if he has been running away from life itself.  Of course, there is a slight detour in his plans as he reconnects with a girl from high school, so a bit of romance is in play here.  I really enjoyed the way the medical information was worked into the story, full of interesting details that added to the story, rather than detract.  Even with the seriousness of the topic, Fay reveals a good amount of humor for this subject. If you read Shelter Me, a few of the characters are roaming around this one as well and you get a few updates on their statuses.  I really enjoy Fay’s style of writing, full of things that make you feel good after reading them.

+1 Add to Google Plus HERE