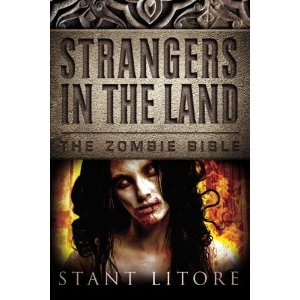 Release Date: October 16, 2012 | Series: The Zombie Bible (Book 3)
The aging prophet Devora bolts awake in terror, gasping for air. In her dream she heard her mother’s shrieks as the ravenous dead pulled her from the tent. Devora had been only a girl then, crying as she listened to her mother’s screams and the tearing of her flesh.
And in the morning, when her mother rose—undead and hungering—Devora slew her.
This third volume of The Zombie Bible takes you to 1160 BC Israel as the walking corpses devour the tents and homesteads of the People. Four will stand against the dead: Devora, who sees what God sees. The slave girl Hurriya. Zadok, a legend among warriors. And the widower Barak, fighting to keep his vineyard free of this new peril. But can they stand together? For the living fear each other—fear the strangers in the land— as much as they fear the hungry dead.
Strangers in the Land brings an episode from the biblical book of Judges to life, fierce and blood spattered. Few will survive the coming of the dead. None will survive unchanged. 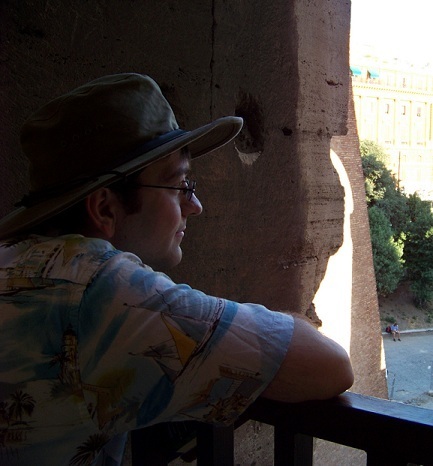 Born a farmer’s son in the Pacific Northwest, Stant Litore took the college road and eventually earned his PhD in English, but remains passionate for things that grow. He spent several years in a dim corner of a library, repairing bruised and battered books, before heading overseas to backpack through Europe. Haunted by the hunger and poverty he witnessed at home and abroad, he began spinning stories about the hungers that devour us and the hopes that preserve us. Today he lives in Colorado with his wife and their two daughters, writing about the restless dead and the restless living. He avoids certain parts of the mountains during the dark of the moon.

My clearest memory is of Charlotte’s Web, but I know that before that I checked out a picture book from the library and read it in five minutes and wanted another book. The librarian told me I had to wait two weeks. I started weeping right there at the desk. My parents showed up and had it out with the man in his office, and it sounded as though God and all his Archangels had shown up to take humanity to task. When the librarian emerged, his face had no color or blood in it. After that I was allowed to read everything I wanted. I should add to this story that all the librarians I have met since have been either saints or heroes, though none of them wore capes. Although one did wear a mask. Long story.

On Blue’s Waters by Gene Wolfe. It is among the most lyrical and poignant novels I have ever encountered, and this is my second time reading it. If you haven’t read Gene Wolfe, I recommend that strenuous and rewarding activity. His mind is a maze and his heart is a deep well.
3. How does your garden grow?

It takes sunlight and rain and a soft voice singing. My wife’s garden, really, though I wish I had more time to spend with my hands in the dark earth—and intend to make the time next year. Herbs, thyme and rosemary, a tomato plant, some hydrangeas. We recently released ladybugs on the garden in great number, and my toddler leapt up and down clapping her hands and crying out, “Little ladybug! Little ladybug!”

4. What is the last thing you Googled?
The Maccabees. I wanted to know where the name came from, what it meant. I’m a history buff, through and through. Best guess: from Aramaic, the Makkaba. The Hammer. If I was riled up and starting a revolt, I would want to be called the Makkaba, too.

Political theater. I am not interested in rooting for a team or looking at who performs well on a televised debate. I want to see numbers, I want to see facts, and I want to hear the truest story the man or woman has to tell about my country. Performance is for the circus or for a novel, not for politics. Politics treated as entertainment makes me cringe. Also jellyfish. Jellyfish are among the most beautiful things I have ever seen yet they terrify me. I cringe whenever I see one in motion. I would like to say that I cringe at zombies, given the subject of my novels, but I don’t. Confronted with a film full of the wandering dead, my reaction is more deer-in-headlights than anything else. I take the edge off the terror by writing a few scenes. Or at least, that’s what I tell myself. I recently listened to the audiobook edition of one of my novels, and found it almost unbearably creepy. Apparently writing about it makes the fear worse, but also more exciting.

My wife cringes at spiders but I find them graceful and lovely. So when it comes to cringing, I suppose it’s just political commercials and jellyfish.

WANT TO WIN THIS BOOK?
Complete the below form
Contest is open to anyone over 13 years old with US mailing address (sorry, no PO Boxes) –  Void where prohibited.
Contest ends on 10.30.12 Winner will be chosen by Random.org
Winner will have 48 hours to respond to email or a new winner will be chosen.
Only one winner per mailing address.  Multiple entries will be deleted.
This giveaway is sponsored by the publisher and ONE book is available.
Follow Me