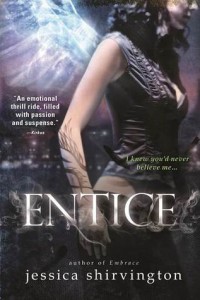 Release Date: September 4, 2012 | Series: Embrace
The war between Exiles and Angels is on — and she’s wanted by both sides.
The hotly anticipated follow-up to Embrace, Entice ramps up the captivating combination of angel mythology, forbidden romance and intense action. Seventeen-year-old Violet Eden’s whole life changed when she discovered she is Grigori – part angel, part human.
Her destiny is to protect humans from the vengeance of exiled angels. Knowing who to trust is key, but when Grigori reinforcements arrive, it becomes clear everyone is hiding something – even her partner, Lincoln.
And now Violet has to learn to live with her feelings for him while they work together to stay alive and stop the exiles from discovering the key to destroy all Grigori. It isn’t easy. Especially when the electricity between her and exile Phoenix ignites, and she discovers his hold over her has become more dangerous than ever.
The race halfway across the world to find the one artifact that could tilt the balance of power between Angels and Exiles brings them to the cradle of civilization, where Violet’s power will be pushed to the extreme. And the ultimate betrayal exposed.

About the Author
How many of us can say we fell in love in high school? A lot of us. But how many of us stayed in love with the same person? Jessica Shirvigton has been lucky enough to marry the man she fell in love with at seventeen, Matthew Shirvington–Olympic sprinter, five-time national 100m champion, and current sports personality with Australia’s Foxtel and Sky News. Jessica and her family live outside Sydney, Australia, where she is currently working on the next book in the Embrace series.
SOURCE:  PUBLISHER
MY THOUGHTS
LOVED IT


The story picks up right where Embrace ended with Vi more confused than ever and almost hating men in general.  She still has feelings for Lincoln and now that she has embraced her angel side, she has more power than ever although not all of the knowledge she needs to survive.  Lincoln and his boss Griffin has slowly been doling out that information slowly to her so when more experienced Grigori show up to help train her and with some new members to help fight the Exiles — angels that have embrace their dark side.  Vi tries and tries to get Linc’s attention but all she gets is a cold shoulder since he has been told there can never be any future between them because of *rules* between fighting partners.  I really appreciated the fact that Nyla and Rudy come aboard and tell her that rule may bent and in their case it has made them stronger partners.

Magda, a witch if there ever was, keeps taking Linc away from Vi and there may also be some weird interference from her connection with Phoenix.  I guess this proves that your first always stays with you and for Vi that may be more than she bargained for.  This gives a whole new meaning to unprotected sex.   As Vi starts to put the bits and pieces together about her mother and exactly who Phoenix is, she comes into her own as a Grigori fighter. She finds that she herself must make choices about her own life. There is of course more epic battles and in all culminates in a major showdown as Vi becomes more comfortable in her own skin and with her own powers.

The addition of some supporting characters help round out the story and add a pumch of humor.  Along with Steph, there in now Spenc who adds some world weary humor.  I expect more of him in the next installment, please! This one has less for parents to worry about since there is only Vi’s unrequited love for Linc and some language as well as a bit of violence.  Again, I read this one quickly and thought it had a bit of a faster pace than the first one. As Vi becomes stronger, I like her more.