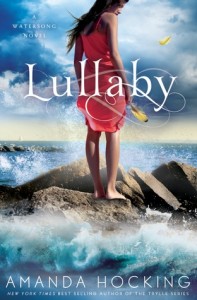 Release Date: November 27, 2012 | Series: Watersong Novels (Book 2)
Harper only wanted a safe, normal life. But when her younger sister Gemma runs off with a dangerous clique of beautiful girls, Penn, Thea, and Lexi, everything changes. Vowing to get her sister back no matter what the cost, Harper must face dangers unlike any she’s ever experienced. Fortunately, she has Daniel by her side, a gorgeous guy who’s devoted to helping her find her sister—and who’s immune to the girls’ dark powers. While Harper searches for her sister, Gemma struggles to adjust to her new life.  Gemma’s powers are growing by the day, and the longer she lives with her new “sisters,” the harder it is to resist entering their magical world.  It’s a realm both dark and beautiful, and where she’s plagued by strange hungers and unspeakable needs.  Just as she’s drifting far away from her old life,  Harper and Daniel find her…but no one can deny how much she’s changed.  All she wants is to return to her family and the mortal world, but how can she do that when she’s become something else entirely—and will they still love her once they learn the truth?Prepare to fall under the spell of Lullaby, the second book in the Watersong series from New York Times bestselling author Amanda Hocking.
About the Author
AMANDA HOCKING is the New York Times bestselling author of the Trylle trilogy and a lifelong Minnesotan. After selling over a million copies of her books, primarily in eBook format, she became the exemplar of self-publishing success in the digital age. This is the second book in her new Watersong series with St. Martin’s Press.

SOURCE  AROUND THE WORLD ARC TOURS

This book picks up right after the ending of Wake.  Gemma has gone with the other three sirens since their leader, Penn, has threatened harm to her family and friends.  The story centers much more around her older sister, Harper, and Harper’s quest to find Gemma and bring her to safety.  This one alternates between Harper and Gemma’s point of view.  Penn is probably the most evil mean girl I have ever read about and again this story continues with  the Slasher Movie goodness.  There were a lot of “don’t do it” and “something bad is going to happen here” type shouts from me.  I read this quick and easy read in about 3 hours, so yes, it really kept my attention!

I am glad I got to know Harper a bit better and Hocking does a wonderful job filling out her character.  Like all second books in a series, this one is a bit more quiet and not so full of action until I was left hanging at the end of the book.  Of course, that is just to keep me reading the rest of the series.
Even Gemma becomes more authentic in this installment. The boys surrounding the girls, Alex and Daniel try their best to help Harper out getting Gemma back home.  They may have a few gifts of their own that might help Gemma but those are only alluded to towards the end of the book.

I also loved Marcy, Harper’s coworker at the library and her snarky comments. Not everything works like she thinks it should and that is part of Marcy’s charm.  Now, if Harper can get over the fact that she can’t be responsible for Gemma any more than this series will take off.  I did miss Nathalie, the girls’ mother, not having that strong in this one. I hope she makes more of an appearance in the next.   I think I enjoyed this one more than the first since the writing seemed to flow a bit better and it was as cartoony as the first.  Parents there is some heavy petting, mentions of alcohol, although no drinking and some violence.

Leave a Reply to YA Novelties Cancel reply