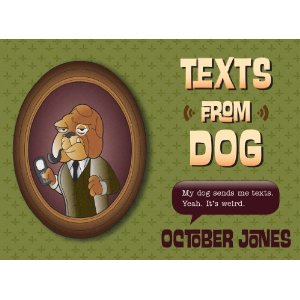 When October Jones figured out he could send text messages to himself on his mobile phone, he naturally decided that the best use of this discovery was to send passive-aggressive messages to himself under the guise of his bulldog. And so the exasperating, slightly delusional, and utterly endearing Dog and his alter-ego BatDog were born.

Texts from Dog features Dog’s attempts to keep the neighborhood safe from the likes of Mr. Postman and his arch-nemesis Cat-Cat—he has managed to only smash three TVs and a patio door in the process. And in between crime fighting sprees and run-ins with the squirrel mafia, there are romantic interludes with pillows, fetch sessions gone terribly awry, and the abusive banter only a bromance between man and his text-savvy dog can spawn.

For those of us who have ever had a conversation with a pet in our heads, Texts from Dog will make you laugh out loud and perhaps even make you think twice about leaving your pet home alone for the day.

About the Author
October Jones was born and raised in Birmingham, England, where, ironically, he spent most of his childhood terrified of dogs. He has recently worked on animation projects for the BBC, as well as doing music videos for UK comedy band The Amateur Transplants.
Dog is the runt of a five-puppy litter born on a farm in Wales.  He was the last to be sold, and arrived in Birmingham slighted and grouchy. He spends most of his time napping, snacking, trying to figure out who the second dog in the bedroom mirror is, and, of course, texting.

Leave a Reply to Chapter by Chapter Cancel reply