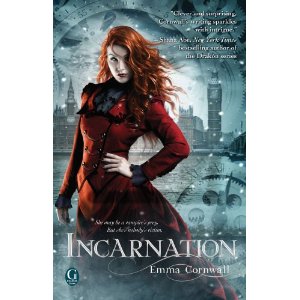 Publication Date: September 18, 2012
In the steampunk world of Victorian London, a beautiful vampire seeks out the author of Dracula–to set the record straight . . . If one is to believe Bram Stoker’s legendary vampire tale, Lucy Weston is Dracula’s most wanton creation, a sexual creature of the night who preys on innocent boys. But the real-life Lucy is nothing like her fictional counterpart—and she demands to know why the Victorian author deliberately lied. With Stoker’s reluctant help, she’s determined to track down the very fiend who transformed her—from the sensual underworld where humans vie to become vampires, to a hidden cell beneath a temple to madness, and finally into the glittering Crystal Palace where death reigns supreme.Haunted by fragmentary memories of her lost life and love, Lucy must battle her thirst for blood as she struggles to stop a catastrophic war that will doom vampires and humans alike. Ultimately, she must make a choice that illuminates for her—and for us—what it means to be human
About the Author
Emma Cornwall is a pseudonym of an established author who has written New York Times bestselling historical and contemporary fiction.
SOURCE:  PUBLISHER
MY THOUGHTS
REALLY LIKED IT
Lucy Weston wakes up in the forest and doesn’t remember much except that she is living like an animal and craves blood.  Slowly, memories leach back into her brain and as she becomes more aware of her surrounding, she realizes that something horrible has happened to her.  She makes her way back to her family’s home and starts to reconnect with her own humanity rather than the creature she has become.  As she reads through the family’s library, she comes across a manuscript by Bram Stoker and realizes it is a thinly veiled characterization of what has befallen her.  She sets off to London discover the truth behind her transformation and confront Stoker.

Victorian London in this case has developed technology based on Tesla’s experiments and becomes aware of paranormal creatures that have always existed but now make their presence known.  Lucy is now one of those creatures although she is discovering that she is not like the other vampires she encounters.  She finds Stoker easily and he directs her to the Bagatelle, an underground lair run by Lady Blanche, who may not have her best interests at heart.  She also reconnects with her beau, Marco and discovers that she is from a long line of Slayers descended from Morgaine from the King Arthur tale.    Marco in turn is a Protector, a group that tries to save humans from the paranromal realms.

Overall, this is a great idea for a story but the adding in of Steampunk details to the story are just a bit of window dressing and do nothing to advance the plot. The combination of Stoker and Arthurian legend is a stroke of genius.  The romance between Marco and Lucy is a wonderfully realized and believable.  The evil Blanche is a good foil to Lucy’s goodness.  Even though Blanche reminded me of a typical Disney villain, Lucy doesn’t end up as a wimpy princess.  You may want to pull out your ancient copy of Dracula and brush up on your King Arthur legend to enjoy this one fully.