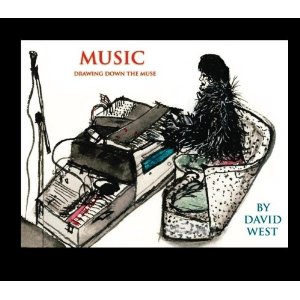 Publication Date: May 31, 2012
David West’s new book “Music” is a survey of drawings done in situ (usually in rehearsal or soundcheck) with various musicians or groups, over the last 20 years. The idea of the series was to define what the experience of the music “felt like,” and to caputure the emotional dynamics of each different situation. Some of these groups still exist, and others existed for a short period of time, or were “supergroups” that were entirely a one-shot deal. The series began in San Francisco in 1990 with Monte Cazazza’s “Love Force,” and continued during the 90s in New York, defining an epoch and an interest in music with a narrative structure. Over the last 8 years in Paris, the focus has changed to the international – with the inclusion of many French and European musicians. From Wire to Patti Smith, from the Bush Tetras to Daniel Darc, and from Devo to Silver Apples, West has strived to express the effect of the musical charge . . . often working with musicians over several days, and with the cover of invisibility he creates . . . The selection herein is a cross section of the best to date. The editor and book designer is renowned photographer Ruby Ray, who coaxed the project to fruition.

I adore stuff like this.  I am a huge art fanatic (ask me about our collection of Americana Outside Art) and I admire any one with talent to draw as well as think outside the lines.  What makes this book really special is that it relates the feelings associated with visual aspect of hearing great music.  The portraits cover a wide range of music from hipster darlings to the mainstream.  I think perhaps my favorite portrait is that of Devo which shows a manic drummer looking something like Vishnu with multiple arms banging on his kit. What fascinates me most about this art collection is that the artist was able to draw these fabulous renderings while attending a concert or during a sound check.  They really capture the spirit of a musical performance.  This lovely book would make an excellent gift of any music fan.