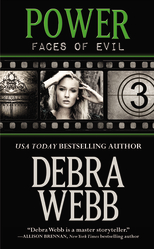 Publication Date: September 4, 2012
Agent Jess Harris is back in another thrilling installment of Debra Webb’s Faces of Evil series.Jess is ready to start the next chapter in her life as the new deputy chief of Birmingham’s major crimes division. But with her first love, Chief of Police Dan Burnett, acting as her new boss, it looks like Jess won’t be able to put the past behind her that easily.Jess has decided to focus all of her attention on work when a celebrated ballet instructor is found dead by one of her students. Though Jess’s instincts tell her otherwise, the death is ruled an accident, and the case is assigned to another division. Still, Jess can’t shake the feeling that there’s more to the story, and her investigation leads her into the worlds of Birmingham’s gang culture and its powerful elite.Now Jess’s investigation has dug a little too deep, and there’s a target painted on her own forehead. Will she be able to solve the crime before her own life is in jeopardy?

You can get this eBook for only $2.99 from Amazon right now!
From the Author
The Faces of Evil series is one I’ve wanted to write for a very long time. POWER is the third book in the series. OBSESSION, the debut in the series, has received critical acclaim and spent numerous weeks on Amazon’s top 100 bestselling romantic suspense list! Be sure to look for book two in the series, IMPULSE, which also spent weeks on Amazon’s top 100! Follow former special agent Jess Harris and chief of police Dan Burnett through the entire twelve-book series!


About the Author
DEBRA WEBB, born in Alabama, wrote her first story at age nine and her first romance at thirteen. It wasn’t until she spent three years working for the military behind the Iron Curtain–and a five-year stint with NASA–that she realized her true calling. A collision course between suspense and romance was set. Since then she has penned nearly 100 novels including her internationally bestselling Colby Agency series. Her debut romantic thriller series, the Faces of Evil, propelled Debra to the top of the bestselling charts for an unparalleled twenty-four weeks and garnered critical acclaim from reviewers and readers alike. Don’t miss a single installment of this fascinating and chilling twelve-book series! 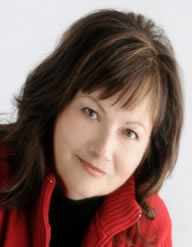 The Witch of the Glen by Sally Watson. It was a story that has stayed with me for nearly half a century!

Actually, right now I’m working on REVENGE, the fifth book in the Faces of Evil series. But last week I read two great romantic suspense novels: Shades of Desire by Virna DePaul and an advance copy of The Thief by a new voice in romantic suspense, V.R. Marks! Both are outstanding!

Oh, now gardening and renovating run close seconds to my first love of books. My husband and I are avid gardeners, flowers and vegetables. Since we live in a really old house we’re always looking for heirloom seeds!

LOL! Where would the blow to the victim’s head need to be to cause a swift death? FYI, the temporal region. There’s an artery there that is fairly vulnerable.

The neglect or harm of children and animals. I have a difficult time broaching those issues even in fiction.

WANT TO WIN A SOME BOOKS?

To celebrate this release, Forever Romance is offering the below titles to one lucky winner!

THE WARRIOR by Margaret Mallory
BAREFOOT IN THE RAIN- by Roxanne St. Claire
AN HEIRESS AT HEART by Jennifer Delamere
WHERE ANGELS REST by Kate Brady
TOO DANGEROUS TO DESIRE by Cara Elliott
TWO SINFUL SECRETS by Laurel McKee

Complete the below form
Contest is open to anyone over 13 years old with US mailing address
(sorry no PO Boxes) Void where prohibited.
Contest ends on 9.19.12 Winner will be chosen by Random.org
Winner will have 48 hours to respond to email or a new winner will be chosen.
Only one winner per mailing address.  Multiple entries will be deleted.
This giveaway is sponsored by Forever Romance and ONE set is available.
Follow Me
Extra Entries
+1 Follow me on Twitter HERE
+1 Like BookHounds on Facebook HERE
+1 Like Win a Book on Facebook HERE
+1 Be my friend on Goodreads HERE
+1 for social networking this giveaway and leave me a link once daily per site
+1 Comment, you can do this daily, just leave an email address.