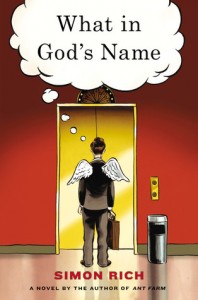 Publication Date: August 7, 2012
Welcome to Heaven, Inc., the grossly mismanaged corporation in the sky. For as long as anyone can remember, the founder and CEO (known in some circles as “God”) has been phoning it in. Lately, he’s been spending most of his time on the golf course. And when he does show up at work, it’s not to resolve wars or end famines, but to Google himself and read what humans have been blogging about him.

When God decides to retire (to pursue his lifelong dream of opening an Asian Fusion restaurant), he also decides to destroy Earth. His employees take the news in stride, except for Craig and Eliza, two underpaid angels in the lowly Department of Miracles. Unlike their boss, Craig and Eliza love their jobs – uncapping city fire hydrants on hot days, revealing lost keys in snow banks – and they refuse to accept that earth is going under.

The angels manage to strike a deal with their boss. He’ll call off his Armageddon, if they can solve their toughest miracle yet: getting the two most socially awkward humans on the planet to fall in love. With doomsday fast approaching, and the humans ignoring every chance for happiness thrown their way, Craig and Eliza must move heaven and earth to rescue them – and the rest of us, too.

Simon Rich “is still the freshest, funniest new writer today,” according to the Chicago Sun-Times. He has written comedy for the New Yorker, Pixar, Saturday Night Live, the Believer, and various movie studios. He’s the author of two collections, Free-Range Chickens and Ant Farm. His first novel, Elliot Allagash, was optioned for a film by Jason Reitman. Rich lives in Brooklyn.
SOURCE: PUBLISHER
MY THOUGHTS
LOVED IT
Heaven is a cube farm, where the newly departed work for forty years and then retire to a heavenly life that sounds a bit like a Google campus with trendy restaurants, free bikes and all the cappuccino you can drink.  Although you get those benefits while you work your five hour days in departments like answering prayers or miracles.  The only problem is that God is bored with his job.  He enjoys Earth and the humans that inhabit it, especially Nascar since the drivers always praise him but they serve no real purpose.  He would much rather be playing golf.
When Eliza is promoted to Miracles from Prayer, she is mentored by Craig, who tries to show her the ropes.  Of course, Craig develops feeling for Eliza, but they are both so socially awkward, that not much really happens there.  Well, until Eliza begins to realize that God has lost his way.  She demands a meeting with him and he tells her that he just wants to do away with Earth and the humans.  She of course, makes a deal with him, to preform a mircle where she can make two geeky humans at least date and kiss within 30 days. If she can accomplish this miracle with the help of Craig, Earth will be saved from destruction.
There are so many laugh out loud funny moments in this book that is really absurd.  Both seem to be as awkwardly shy as the couple they have adopted to save the Earth.  So, the story is a bit hokey and predictable, but it is full of fun.  There are plenty of Heaven jokes and you really wonder if it can all be true.  Also, guest appearance by Regis Philben and my favorite character, Raoul, who is one of those guys that stands by the freeway and proclaims the end of the world is coming.  God actually speaks to him and of course, he is completely sane but seen as crazy.  Overall, fans of Douglas Adams and Christopher Moore should adore this one.

WANT TO WIN A COPY OF THIS BOOK?
Complete the below form
Contest is open to anyone over 13 years old with a US or Canadian mailing address (Sorry – NO PO Boxes!) Void where prohibited.
Contest ends on 9.14.12 Winner will be chosen by Random.org
Winner will have 48 hours to respond to email or a new winner will be chosen.
Only one winner per mailing address.  Multiple entries will be deleted.
This giveaway is sponsored by the Little Brown and ONE BOOK is available.
Follow Me
Extra Entries
+1 Follow me on Twitter HERE
+1 Like BookHounds on Facebook HERE
+1 Like Win a Book on Facebook HERE
+1 Be my friend on Goodreads HERE
+1 for social networking this giveaway and leave me a link once daily per site
+1 Comment, you can do this daily, just leave an email address.