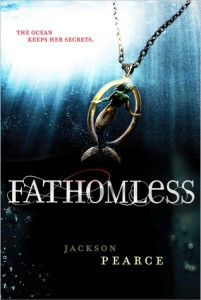 Publication Date: September 4, 2012
Celia Reynolds is the youngest in a set of triplets and the one with the least valuable power. Anne can see the future, and Jane can see the present, but all Celia can see is the past. And the past seems so insignificant — until Celia meets Lo.

Lo doesn’t know who she is. Or who she was. Once a human, she is now almost entirely a creature of the sea — a nymph, an ocean girl, a mermaid — all terms too pretty for the soulless monster she knows she’s becoming. Lo clings to shreds of her former self, fighting to remember her past, even as she’s tempted to embrace her dark immortality.

When a handsome boy named Jude falls off a pier and into the ocean, Celia and Lo work together to rescue him from the waves. The two form a friendship, but soon they find themselves competing for Jude’s affection. Lo wants more than that, though. According to the ocean girls, there’s only one way for Lo to earn back her humanity. She must persuade a mortal to love her . . . and steal his soul.

About the Author
Jackson Pearce is the author of Sisters Red, Sweetly, Purity, and As You Wish. She lives in Atlanta, Georgia.
SOURCE:  AROUND THE WORLD ARC TOURS
MY THOUGHTS
LOVED IT

Celia, Anne and Jane are triplets abandon in a boarding school that they never leave because there mother has died and their father is a victim of Alzheimer’s.  Anne can see the future, Jane can see the present but all Celia can do is visit the past.  Together they form a scam, getting rich boys to buy them things and take them to dinner at the beach side resort they live near. Since her power is the least useful, Celia tends to stay away from her sisters’ antics  One night while she is staring into the sea, a local minstrel (ok, cool singer-songwriter dude), falls into the ocean and just as he is about to go under for the third time, Celia races in to save him but is caught short by another naked girl who got to him first.  She does give him mouth-to-mouth and Jude (cool guitar dude) thinks it is Celia who rescues him, not realizing that there is a second girl helping out.

The two begin to spend much time together, but Jude remembers singing that has now inspired him to write that hit song he has always just missed.  Celia goes back to the beach and meets Lo, the girl from the sea who has helped save him. They bond as Celia helps Lo remember her past life and almost finds a purpose to her own life.  Creepy.  For some reason this seems to turn into a creature feature with soulless sirens with blood lust.  The sirens/mermaids/ocean girls sense their humanness disappearing to the extent that they no longer remember their human names.  Some try to cling to the shred of their humanity but more often than not, they go numb and mindless – just existing until they become “angels”.  THAT becomes a real twist in the story when Lo discovers exactly what that means.  Creepy.

As Lo and Celia discover what is missing from each other’s lives, they both try to deal with what they are dealt.  For Celia, that means adjusting to her powers of people finding their past, while Lo must face the inevitable.  This story, based in part on the Little Mermaid, is not warm and fuzzy but dark and creepy.  I did enjoy it but this was not my favorite Jackson Pearce story since it really had a melancholy feel to the whole story.  Everyone just seemed sad until the end.  There wasn’t much objectionable to the story, some kissing, a bit of language and a mention of alcohol.  This is a must read for Pearce fans since she always has a unique twist to beloved fairy tales.