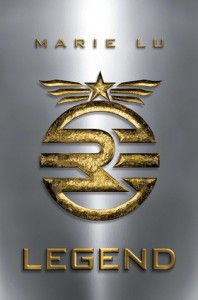 Publication Date: November 29, 2011 | Series: Legend
What was once the western United States is now home to the Republic, a nation perpetually at war with its neighbors. Born into an elite family in one of the Republic’s wealthiest districts, fifteen-year-old June is a prodigy being groomed for success in the Republic’s highest military circles. Born into the slums, fifteen-year-old Day is the country’s most wanted criminal. But his motives may not be as malicious as they seem.From very different worlds, June and Day have no reason to cross paths—until the day June’s brother, Metias, is murdered and Day becomes the prime suspect. Caught in the ultimate game of cat and mouse, Day is in a race for his family’s survival, while June seeks to avenge Metias’s death. But in a shocking turn of events, the two uncover the truth of what has really brought them together, and the sinister lengths their country will go to keep its secrets.Full of nonstop action, suspense, and romance, this novel is sure to move readers as much as it thrills.
About the Author
Marie Lu (www.marielu.org) is the art director at Online Alchemy, a video game company, and also owns the business and brand Fuzz Academy. She lives in Los Angeles, California.
SOURCE: Library
MY THOUGHTS
LOVED IT

After natural disasters and civil war has devastated much of what was once the United States of America, the country has been torn apart. A military dictatorship has taken over the western part of the United States, while eastern part is flooded.   Day and June both have a lot in common, even though they were born on opposite ends of the social and economic spectrum.   They both are fifteen, brilliant, mentally and physically gifted.  Yet June has had all of the opportunities of an education, health care and a secure home and is slated to become a great military figure with perfect aptitude scores.   Day has had to struggle in the slums of what once Los Angeles and didn’t pass the trial which determines a child’s future and he is left for dead. Their individual stories are told in alternating chapters until they meet when June captures Day as the country’s most wanted criminal.

OK, June bothered me since she just seemed to self righteous and perfect at first even though she did pull a few pranks at school and tried to fight the system a bit.  She knows she is smart and has been called the prodigy but really wants to be in the military system.  She is sent on her first assignment to capture Day.  Day is street smart and lives under cover since he is supposed to be dead.  He revolts against the system by sabotaging the government and their fight against the colonies, which is really the renamed eastern part of the US.  He thinks that the colonies must have a better system than the rule he lives under.  When he meets up with a street fighter, who clues him in to what is actually happening.  His other friend, Tess, has always stood by his side and when they help June he finds himself quickly double crossed.

The plot is a pure dystopian standard where the country has been devastated, the government is evil and the only hope are the kids and young adults who must come to the rescue of the nation.  Before you think this is just another formula in the current trend, the writing and characters stand above the competition.  I really enjoyed it and even the first part dragged a bit for me, the end was a pure rush which nicely sets up the next book in the trilogy.  This book is pretty safe even for young teens with the only objection being violence.  There are one or two kisses, a mention or two of alcohol and even the violence is not that graphic.