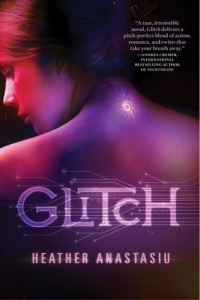 Publication Date: August 7, 2012 | Series: Glitch – Trilogy
In the Community, there is no more pain or war. Implanted computer chips have wiped humanity clean of destructive emotions, and thoughts are replaced by a feed from the Link network.
When Zoe starts to malfunction (or “glitch”), she suddenly begins having her own thoughts, feelings, and identity. Any anomalies must be immediately reported and repaired, but Zoe has a secret so dark it will mean certain deactivation if she is caught: her glitches have given her uncontrollable telekinetic powers.
As Zoe struggles to control her abilities and stay hidden, she meets other glitchers including Max, who can disguise his appearance, and Adrien, who has visions of the future. Together, this growing band of glitchers must find a way to free themselves from the controlling hands of the Community before they’re caught and deactivated, or worse.
In Heather Anastasiu’s action-packed debut, Glitch begins an exciting new young adult trilogy.
About the Author
HEATHER ANASTASIU grew up in Texas and now lives in Minneapolis, Minnesota with her husband and young son. She spends most days most days writing at a coffee shop or daydreaming about getting a new tattoo.
SOURCE: PUBLISHER
MY THOUGHTS
ABSOLUTELY LOVED IT


Zoel lives in a controlled environment, where brains are reprogrammed and people are essentially worker bees, doing nothing but following orders and barely existing.  In a post apocalyptic United States, people have been told that the world is unsafe and they must exist in a bunker like world, underground and never seeing anything but their own small little space.  They are fitted with computer chips that override emotions as well as desire and violence.  Much like communist China, the world they live in revolves around “self reporting” their glitches so their brains can be repaired or decommissioned.


The people are told this is to keep them safe and Zoel, believes it all until she starts to have episodes where reality shines through and she feels things and has thoughts.  She thinks she is alone until she meets Max and others who also are “glitching”.  Now, nicknamed Zoe by the others, she learns that glitchers have powers, hers being telekinesis.  The story revolves around Zoe becoming a resistance fighter and taking on the government who rules with an iron fist when she learns about how corrupt their system is.


This is a fresh take on a dystopian theme that has become a base for a lot of young adult books lately.  Kids find they are being abused / used, rise up to fight the power with some sort of paranormal help and try to win back control to become human again.  I really enjoyed all of the characters and their struggles and look forward to the next in the series.  This should be fine for even the youngest of teens with a bit of violence, a teen pregnancy, some kissing but nothing graphic.  If you enjoyed Under the Never Sky or Across the Universe, this should be on your list!

Hey! If you are planning on ordering or preordering any of these books, consider using my Amazon links below to help support BookHounds.  I get a small (very small) percentage of anything you buy if you use my links to start your shopping!