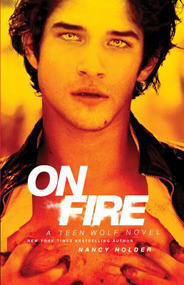 Publication Date: July 17, 2012 | Series: Teen Wolf
DREAMS CAN COME TRUE. JUST NOT THE GOOD ONES.In Beacon Hills, a mountain lion is blamed for a spate of vicious attacks; Scott McCall wishes the cause was that simple. Unfortunately, hiding his werewolf identity, especially from Allison Argent, while fighting his need to shift, is only one problem. Keeping his mysterious, murderous Alpha off his back (literally), avoiding hunters, deciphering strange dreams about flames and impending doom . . . is really eating into lacrosse practice and hang-out time. So when Jackson Whittemore doesn’t show for his date with Lydia, Scott hopes that helping Allison track down their buddy will be simpler. Derek—whose hunger for vengeance blinds him to the dangers that lie in wait—and Stiles are also looking, but the worried teens’ search is leading right to the preserve from Scott’s nightmare. They aren’t the only ones in the woods, and their little trip starts looking less like a rescue mission and more like an elaborate trap—one that will force them to make the choice between killing and being killed. . . .

Nancy Holder has published sixty books and more than 200 short stories. She has received four Bram Stoker awards for fiction from the Horror Writers Association, and her books have been translated into more than two dozen languages. Her books include the New York Times bestselling series Wicked and the novel The Rose Bride. A graduate of the University of California at San Diego, Nancy is currently a writing teacher at the school. She lives in San Diego with her daughter, Belle, and their growing assortment of pets. Visit her at NancyHolder.com.
SOURCE:  PUBLISHER
MY THOUGHTS
LOVED IT
The story starts out with the death of a mountain lion, blamed for mysterious deaths taking place in Beacon Hills, California.  Scott knows that the lion is not to blame and there are werewolves among the residents since he has just been turned.  He has been hiding this from his crush, Allison, the daughter of the sheriff and there are some secrets that her family is holding that may turn the relationship into a Romeo and Juliette scenario.  When Allison and Scott go to meet up with her best friend, Lydia and her boyfriend, Jackson, he doesn’t show up. Jackson has been searching for his biological father and this takes him to meet with someone he believes has the information.


There is a bit of a back story detailed about the wolf clans that reside in the area and that Allison’s mother has some family secrets of her own, that she is a sworn enemy of the wolves and a Hunter.  The true story about her unfolds in flashbacks about Derek, the wolf that is mentoring Scott.  So there are a lot of characters to keep straight but there is so much action that all of the parts work together seamlessly.  Of course, there are the requisite plot twists and turns to this quick and easy to read book.  This is not the fun Michael J. Fox teen angst movie that I remember.


Nancy Holder is such a wonderful author that you quickly get into this world and don’t want to leave.  The characters are full of depth and easy to believe. There is some violence, a few sexual situations, language and alcohol use, which should be no surprise for a show on MTV.  I haven’t watched the series yet, but now I am going to tune in.