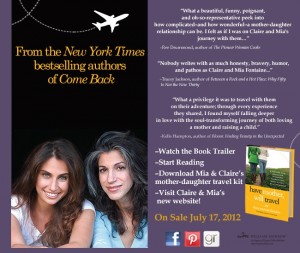 What made you decide to write this book?
Claire and Mia: We wanted to pass on lessons learned that transformed our relationship a second time, celebrate the mother and adult daughter relationship, and share with readers of Come Back how things turned out for Mia.

Of all the countries that you visited, what was your favorite and why?
Mia: Nepal, by far. Certainly the culture, history and architecture are remarkable; but, more important, and what has made it stay with me, was that some of our experiences there were surprising eye-openers and a real catalyst for learning and growth
Claire: As fascinating and fabulous as all of the countries were, I’d have to say France. For the same reason Nepal was for Mia. Something about the sights, sounds, smells, and our experiences there, all combined to strike a note within me and create some deep internal shifts that have shaped my life ever since.

What was the most powerful lesson you each took away from the trip about yourself and about each other?
Claire: That the depth of the relationship starts with the mother. I found that the degree to which I opened my heart and got really honest and vulnerable with Mia throughout the trip was the degree to which it was returned and the degree to which the relationship deepened.
Mia: That I’m a lot more like my mom than I thought I was, and that she doesn’t have it all together to the degree that I thought she did. Which, contrary to what it may initially seem, made me love and respect her all the more, both for being willing to share that with me, and because it made me see that, you can struggle and succeed at the same time. That even while she’s muddling through uncertainty or insecurity, she’s moving in the direction she wants to go. For myself, I learned that I needed to take my professional and financial future more seriously than I had been, because the years go by and if you don’t decide where you want them to go, you wake up at fifty wondering how you got where you are. You surveyed a lot of women about their own mother-daughter relationships.

Did any common themes emerge?
Claire: One of the most common things was also the most surprising and heartbreaking—so many women, of all ages, even those whose mothers have passed away, wished that their mom was happier. This was really sobering, reinforcing something I learned during the time of Mia’s struggles—that the best way to raise a strong and happy daughter is to be

How long did it take to write the book? What was the process of writing with your mother or daughter like? Did any sparks fly?
Claire and Mia: From start to final draft, almost two years. It was actually more difficult to write than Come Back; there were more elements to weave together and the themes and plot were much more subtle. Writing together wasn’t really any different because we’re mother and daughter. We’re in colleague mode when we work, very professional. Sparks didn’t fly because neither of us has any ego attached to our writing. We never took it personally when one of us was told something wasn’t our best writing, or a scene or chapter didn’t work. Also we really respect each other’s opinions and abilities as writers. Outside the actual writing process there were at times some sparks—though not nearly as many as people expected there to be—which says a lot about how the mother/daughter relationship is perceived here. The main conflicts arose around scheduling; you take certain liberties with your mom or daughter—Mia would occasionally show up ready to work later than Claire wanted to, and occasionally Claire wouldn’t finish what she committed to because she usually has no sense of what time or even day it is. Sometimes we’d regress to old mother/daughter roles and patterns (chapter 2 in the book is aptly titled The Bitch and the Boss) though we’d usually recognize it pretty quickly and clean it up.

What did you each learn about the other that surprised you, both on the trip and while writing the book?
Claire: I had no idea that Mia sometimes struggled with comparing herself to other women, over looks or accomplishment, nor how much it distressed her that she did it. I thought she was more confident than she sometimes was.
Mia: I had no idea that before she became a writer my mom very much wanted to become a doctor, or that she chose a college based on where her then-boyfriend was going. My mom’s such a feminist that it never occurred to me that when she was younger she fell prey to the same naïve, fanciful notions of love that so many women do. Also, I’m an only child, and I never knew she regrets not having more children. While writing the book, it was interesting to see, once again, how focused and methodical she can be while structuring and writing because in daily life she’s often off in her own world, which makes the more practical things (like remembering how to find your way back to a hotel, or what conversion rates are) impossible for her to keep track of!


Claire, in the book you deal with your own strained relationship with your mother. Are the two of you close now, and how would you advise women with a similarly difficult relationship?
Yes, we are. It took a while but now she gets upset when I don’t call. I think the two most important things in healing the relationship, as a mother or daughter, is, first, to be accountable; look at where your own behavior and attitude may have eroded the relationship, and acknowledge it. The second is the simplest and the most powerful – love. Just let love inform everything you say, think or do. Coming from a place of love, no matter how bad it gets, almost always works, either immediately or over time. Love never fails. What’s the most important lesson each of you hopes readers will take away from your journey? Claire: Your relationship with your mother or daughter is a mirror for all of your relationships; it can be either a great source of strength, support, and inspiration or of great pain and regret. So why not make it an intentional relationship? Why not consciously craft the relationship you truly want? Mia: You’re never too young to start planning your future, and you’re never too old to create a different one for yourself. Also, to really appreciate just how unique and valuable the unconditional love between mothers and daughters can be.


What are you each working on now? Will you write another book together?
Claire: I’m working on a book on a core set of principles and tools that can transform your life and your relationships. Then returning to the historic novel I’d begun researching while I lived in Paris.
Mia: I’m most interested in narrative nonfiction (books along the lines of The Lost City of Z, Devil in the White City, or Seabiscuit) and am beginning the process of researching what I’m pretty sure will become my next book. I can’t say much at this point, but it’s about a little known, but extremely influential, figure in twentieth-century American culture and business.


Claire, when did you decide to become a writer?
Mia, do you think you became a writer because your mother was one?
Claire: From the time I learned, in first grade, that all the books that I so loved reading didn’t always exist, like the trees or the sky, but that an actual person actually made the stuff up and wrote it down.
Mia: I’ve always enjoyed writing and editing but I never actually planned on being a writer, let alone an author. I interned at, and was planning on working in, media (whether print or TV journalism), but when the opportunity to write a book presented itself, I’m so glad I took it because I fell in love with the process of researching and writing books, and found a lifelong career.


What advice would you give to aspiring authors?
Claire: I think the most important first step is deciding your purpose. When your reader puts down your book, what do you want them to know and how do you want them to feel? Unsettled, moved, sad, grateful? What new awareness do you want them to have? What’s the impact you want your book to have? This will help you determine themes, style, what to include and leave out. In terms of craft, it’s something I learned from screenwriting: structure, structure, structure. There’s no other way to be in command of your material, or to command and sustain a reader’s attention.


What’s your best and worst working habit?
Claire: My best habit is trust. I’ve never struggled with writer’s block because I trust that whatever it is the work needs will emerge; I’ve learned that my unconscious almost always does a better job at solving narrative puzzles than my conscious, thinking mind. My worst habit is distraction.
Mia: My best habit is not having an ego when it comes to my writing. I like it when my mom or my editor comes back to me with a marked-up draft because it ultimately makes me a better writer. My worst is discipline. I work best under deadline because when left to my own devices, I can procrastinate as if it’s my job, convincing myself I have more than enough time to read a book, take a beach day, sale shop, or try a new recipe.