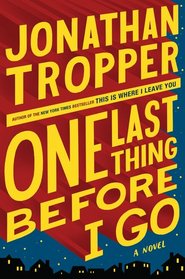 Publication Date: August 21, 2012
Following his breakthrough success with the New York Times bestseller This Is Where I Leave You, Jonathan Tropper’s latest novel is a moving, outrageously funny look at one family’s attempts to conquer life’s surprises.

In 2009, Jonathan Tropper—whose previous novels have been acclaimed as superb, tender, smart, honest, sweet, deft, and magnificent, among other praise—made his Dutton debut with This Is Where I Leave You and promptly landed on bestseller lists nationwide. And now, with One Last Thing Before I Go, he offers his greatly expanded readership a novel every bit as hilarious, every bit as heartbreaking.
Silver has begun to accept that life isn’t going to turn out as he expected. The exwife he’s remained friends with is about to marry a terrific guy Silver can’t quite bring himself to hate. And his Princeton-bound teenage daughter has just confided in him that she’s pregnant—because he’s the one she cares least about letting down. As the wedding looms and the pregnancy sinks in, this broken family struggles, bonds, and wrestles with each member’s individual anxieties. Lives begin anew, change radically, or, in Silver’s case—as he discovers that he could die at any moment without an operation he refuses to have—may be about to end in an instant.
One Last Thing Before I Go demonstrates yet again Tropper’s deft touch with the darkest of materials and his ability to make readers laugh out loud in one paragraph and move them to tears in the next.

About the Author
Jonathan Tropper is the New York Times bestselling author of five previous novels; Plan B, The Book of Joe, Everything Changes, How To Talk to a Widower, and This Is Where I Leave You. His books have been translated into over twenty languages. He is also a screenwriter, and the co-creator and executive producer of the HBO/Cinemax television show Banshee, premiering in 2013.