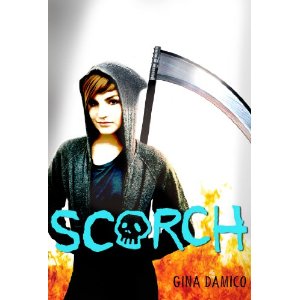 Publication Date: September 25, 2012 | Series: Croak
Sixteen-year-old Lex Bartleby is a teenage grim reaper with the bizarre ability to damn souls. That makes her pretty scary, even to fellow Grims. But after inadvertently transferring her ability to Zara, a murderous outlaw, Lex is a pariah in Croak, the little town she calls home. To escape the townspeople’s wrath, she and her friends embark on a wild road trip to DeMyse. Though this sparkling desert oasis is full of luxuries and amusements, it feels like a prison to Lex. Her best chance at escape would be to stop Zara once and for all—but how can she do that from DeMyse, where the Grims seem mysteriously oblivious to Zara’s killing spree?

GINA DAMICO is the author of Croak. She lives outside of Boston with her husband, two cats, and a closet full of black hoodies. www.ginadami.com

Lex is stuck with an unbearable power to damn souls as well as being a grim reaper, not only can she send souls to the afterlife, she can turn them into ghosts, forced to walk the earth in a neverending afterlife on Earth with no chance of reuniting with loved ones.  Zara has tricked Lex into sharing her  Damning power and is using it to create chaos beyond removing criminals in order to create a new world order.  Driggs is still by Lex’s side as well as the other Juniors who now find themselves ostracized by the townspeople of Croak and led by Norwood and Heloise, who place all of Zara’s doings squarely on the group of teenagers and depose Uncle Mort as mayor.

In order to escape the hell that is now Croak, the group escapes to DeMyse which is another Grim town much like Las Vegas for reapers.  Her uncle Mort has supplied the group with a loophole that allows them to “crash” together to escape the town and Zara.  Lex has also uncovered a bit of history and some notes that lead her to search for the Wrong Book which is basically a book of all the wrong things that should never be done and unravel the world’s order.  Zara is also on the trail of the book and she will do anything to get her hands on it, even kill any who stand in her way.

There is nonstop action as the group bands together to stop Zara and clear their names.  As the crew continue to work their way back together, Norwood and Croak are out to get them as well as Zara.  Of course this ends in another cliffhanger but with one twist I wasn’t expecting.  Uncle Mort uses his wiles to protect them all.  The story is filled with lots of wonderful wordplay and snarky dialogue that I adore.  You are immediately swept up in Lex’s world and drama while the descriptions were right on target without being overly wordy.  Parents should note that there is lots of PDA between Lex and Driggs, some language, drinking, mentions of drugs, violence and death, so this one is best suited for older teens.