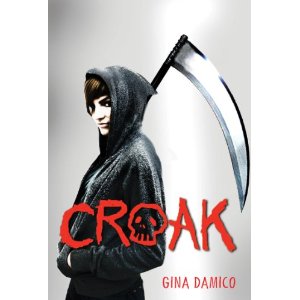 Book Description
Sixteen-year-old Lex Bartleby has sucker-punched her last classmate. Fed up with her punkish, wild behavior, her parents ship her off to upstate New York to live with her Uncle Mort for the summer, hoping that a few months of dirty farm work will whip her back into shape. But Uncle Mort’s true occupation is much dirtier than that of shoveling manure.
He’s a Grim Reaper. And he’s going to teach her the family business.
Lex quickly assimilates into the peculiar world of Croak, a town populated entirely by reapers who deliver souls from this life to the next. Along with her infuriating yet intriguing partner Driggs and a rockstar crew of fellow Grim apprentices, Lex is soon zapping her Targets like a natural born Killer.
Yet her innate ability morphs into an unchecked desire for justice—or is it vengeance?—whenever she’s forced to Kill a murder victim, craving to stop the attackers before they can strike again. So when people start to die—that is, people who aren’t supposed to be dying, people who have committed grievous crimes against the innocent—Lex’s curiosity is piqued. Her obsession grows as the bodies pile up, and a troubling question begins to swirl through her mind: if she succeeds in tracking down the murderer, will she stop the carnage—or will she ditch Croak and join in?
About the Author
From Goodreads:
I grew up under four feet of snow in Syracuse, New York. I received a degree in theater and sociology from Boston College, where I was active with the Committee for Creative Enactments, a murder mystery improv comedy troupe that may or may not have sparked my interest in wildly improbably bloodshed. I have since worked as a tour guide, transcriptionist, theater house manager, scenic artist, movie extra, office troll, retail monkey, yarn hawker, and breadmonger. I live in Boston with my husband, two cats, and a closet full of black hoodies.
NOTE: I don’t check back here as often as I’d like to (OR write reviews), so instead of sending me a friend request or following me, why not hit me up on Twitter instead? @ginadamico web http://ginadami.co/

Lex has uncontrollable urges to hurt people almost to the point of killing them.  She has an almost superhuman strength about her, so just as she is about to be kicked out of school, her parents ship her off to her uncle’s farm where they think some good old fashioned work will help her contain her violent tendencies.  All except Uncle Mort doesn’t have farm chores in mind for Lex. He know she has all  the qualities to become an excellent grim reaper, just like he is.  Lex falls in line with her new life strategy and meet people her age who understand her.  Not as well as her twin, Cordy, but it is nice not to hide her newly discovered gifts any longer.  I love the fact that they are named after Lexington and Concord, from the Revolutionary War.
Uncle Mort has teamed her up with Driggs, another reaper misfit, and things are really starting to fall into place when the pair discover that people are dying and no one knows the cause of death.  They begin to suspect that the murderer is actually another reaper since these people are scheduled to die.  The story quickly because a romantic paranormal thriller with the clock ticking as they try to discover who is doing the deed as Lex and Driggs slowly find that they are in love.  The story reminded me a bit of Dead Like Me that ran on television years ago about a teenage reaper mixed in with a bit of Christopher Moore weirdness and humor.
I just adored the writing and how everything flowed, especially with my favorite thing on earth: snark and sarcasm.  OH MY!  What a treat this story was!  I immediately got right into Lex and her whole world which contained a bit of Harry Potter magical elements as well.  Lex is one of those characters that you can easily identify with, she isn’t perfect and she knows it.  The other characters in the book come from broken homes and Lex is almost set aside since she comes from a loving home.  She questions authority, she is extremely curious and she does end up finally becoming comfortable in her own skin.  The evil Zara is an excellent foil to Lex’s goodness.  Now, I can’t wait for the follow up, Scorch that will be released next September.  It is going to be a long summer wait.