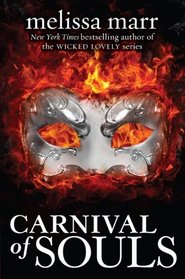 Publication Date: September 4, 2012 | Series: Carnival of Souls
In a city of daimons, rigid class lines separate the powerful from the power-hungry. And at the heart of The City is the Carnival of Souls, where both murder and pleasure are offered up for sale. Once in a generation, the carnival hosts a deadly competition that allows every daimon a chance to join the ruling elite. Without the competition, Aya and Kaleb would both face bleak futures–if for different reasons. For each of them, fighting to the death is the only way to try to live.

All Mallory knows of The City is that her father–and every other witch there–fled it for a life in exile in the human world. Instead of a typical teenage life full of friends and maybe even a little romance, Mallory scans quiet streets for threats, hides herself away, and trains to be lethal. She knows it’s only a matter of time until a daimon finds her and her father, so she readies herself for the inevitable. While Mallory possesses little knowledge of The City, every inhabitant of The City knows of her. There are plans for Mallory, and soon she, too, will be drawn into the decadence and danger that is the Carnival of Souls.

From Melissa Marr, bestselling author of the Wicked Lovely series and “Graveminder,” comes a brand-new tale of lush secrets, dark love, and the struggle to forge one’s own destiny.

Melissa Marr is the author of the bestselling Wicked Lovely series and of Graveminder. She is also the co-editor, with Kelley Armstrong, of Enthralled: Paranormal Diversions. She lives in the Washington, DC, area.

Mallory has moved repeatedly through out her childhood, always on the run from some evil element that she knows are daimons but still is unclear exactly what they are, only they want to kill her.  Her mother left her and her father, so Mallory has essentially been on her own, without friends since she changes schools so often.  When she meets a gorgeous boy after school one day, her life begins to change and she thinks this might be her chance for romance and a normal life.  The boy, Kaleb, seems to know alot about her and there is an instant attraction, something that he isn’t expecting since he was hired to find her by her uncle, Haage.  Kaleb is actually a daimon in the lowest rung of a social class in The City that is populated by his kind.  Through Kaleb, she discovers her father is actually a witch and his kind are mortal enemies of the daimons.  At the center of The City is the Carnival of Souls, a sort of market where anything can be bought and sold…I mean anything…

Kaleb, who has a sort of werewolf-type power, has made his living as a fighter and lover, doing whatever it takes to survive. As he tries to fight his way out of his social class, Marchosias, the ruler of The City, has created a type of gladiator battle and to the winner comes riches and a societal upgrade as well as freedom.  The freedom is exactly what Aya is fighting for since as a woman, her rights are dictated by men, marriage and reproduction.  The two make a pact to protect each other while Mallory becomes a unwitting pawn in the game.  Until she finds out exactly who she is, then she starts asking questions, a lot of questions and she doesn’t like the answers.  There are lots of social statements that make important points about poverty. class and women’s rights.  Aya is a strong woman and I think that Mallory will turn out to be one as well.

This is such a beautifully written story full of intrigue, love, class warfare, and full of Roman gladiator type action in the vein of The Hunger Games, Daughter of Smoke and Shadow and Bone.  Like all of Marr’s other books, you are immediately drawn into the world and the fast paced tale that unfurls.  I was left gasping on the last page because I didn’t want to leave.  I think it will be another year before the next one in the series is released and I can’t wait!    I didn’t think it was overly graphic, so if you survived The Hunger Games, this should be on your list as your next read.  I wish I could go into more detail about the story but I don’t want to reveal anything more. Parents, be aware that there is violence, mentions of alcohol/drugs,  and sexual situation.