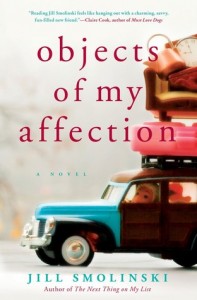 Publication Date: May 1, 2012
In the humorous, heartfelt new novel by the author of The Next Thing on My List, a personal organizer must somehow convince a reclusive artist to give up her hoarding ways and let go of the stuff she’s hung on to for decades.
Lucy Bloom is broke, freshly dumped by her boyfriend, and forced to sell her house to send her nineteen-year-old son to drug rehab. Although she’s lost it all, she’s determined to start over. So when she’s offered a high-paying gig helping clear the clutter from the home of reclusive and eccentric painter Marva Meier Rios, Lucy grabs it. Armed with the organizing expertise she gained while writing her book, Things Are Not People, and fueled by a burning desire to get her life back on track, Lucy rolls up her sleeves to take on the mess that fills every room of Marva’s huge home. Lucy soon learns that the real challenge may be taking on Marva, who seems to love the objects in her home too much to let go of any of them.
While trying to stay on course toward a strict deadline—and with an ex-boyfriend back in the picture, a new romance on the scene, and her son’s rehab not going as planned—Lucy discovers that Marva isn’t just hoarding, she is also hiding a big secret. The two form an unlikely bond, as each learns from the other that there are those things in life we keep, those we need to let go—but it’s not always easy to know the difference.

Jill Smolinski is the author of the novels The Next Thing on My List and Flip-Flopped. Her work has appeared in major women’s magazines, as well as in an anthology of short stories, American Girls About Town. She lives in Los Angeles with her son.

MY THOUGHTS
LOVED IT
This is the story of stuff and how that stuff creates memories and causes people to horde stuff so they don’t lose the memories.  When  Lucy, the author of a book called Things Are Not People about organizing stuff, sells off everything to put her son, Ash, into rehab, she finds herself without the people she loves as well.  Her boyfriend, Daniel, has left her and now Ash won’t speak to her.  Broke and homeless, Lucy is hired to help artist Marva Meier Rios clean up her hording ways and if she can accomplish this within the give time period, she will have enough money to start over.  Marva’s son has placed complete trust in Lucy’s ability to get her life, both physical and mental,  under control and the stuff surrounding her cleaned up.
This story is told with humor and dignity with a bit of drama thrown in for good measure.  Lucy is forced to confront her own issues while helping Marva adjust to hers.  Each woman has issues with their sons.and the objects in their lives are reflections of those problems.  As Lucy goes through the layers of things in Marva’s house, they reveal details about the owner.  She must be careful not to throw anything away since the value maybe greater than they appear.  As they both get past the things in their life, the truth about their relationships come to the forefront and allow them to make amends.  I think any fan of those hording shows will love this accessible story.  Fans of Claire Cook and Beth Harbison are going to adore it!