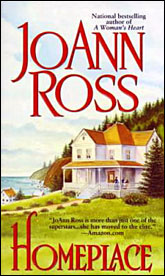 Publication Date: December 29, 2006
Contemporary and compelling, the novels of JoAnn Ross draw their power from the laughter and tears that fill women’s lives. Now, after her triumphant bestseller “A Woman’s Heart,” she makes a dazzling Pocket Books debut with a richly emotional tale of a woman struggling with her unconventional family…and a deep longing for a love of her own.
Fighting legal battles eighty hours a week has left Raine Cantrell burned out and empty. Although she once dreamed that success might make the father who walked away without a backward glance take notice, the high-powered big-city lawyer now finds herself feeling very alone. Then she gets an urgent call from three kids in trouble in her Washington state hometown, and suddenly Raine is returning to face unresolved feelings, unhealed wounds — and an unexpected desire.
Sheriff Jack O’Halloran, a man with a tragedy in his past and a six-year-old daughter to raise alone, has three teens barricaded inside a house and the media clamoring for a story. He isn’t ready for Raine to invade his territory — or his thoughts. And Raine isn’t ready for anyone to touch her heart.
Unable to deny their attraction to each other, their solution is adult, reasonable — and totally foolish. They decide to have a simple affair. But they are about to discover that love is rarely simple — and that lives can change forever in a single heartbeat.
A tender and deeply affecting tale, “Homeplace” will linger in your heart long after the last page is turned.
You can read an excerpt HERE

Publication Date: December 29, 2006
“One of the best storytellers the genre has produced” (Amazon.com), JoAnn Ross creates characters so vibrant and funny they’re irresistible. Now she triumphs again with a remarkably intimate tale that illuminates the ardent emotions of a woman coming to terms with her life — and with her heart.
After her seemingly idyllic marriage turns out to be a pretty illusion, Savannah Townsend returns to her hometown of Coldwater Cove, Washington. Determined to live life on her own terms, she takes on the task of restoring the local Far Harbor lighthouse and making it the cozy inn she had always dreamed of. But she hasn’t anticipated opposition from the lighthouse’s owner, her grandmother’s disturbing memory losses, or the problems of an emotionally wounded teenage girl. Most of all, she hasn’t planned on having feelings for Daniel OHalloran, a caring and passionate man from her past.
As affection moves to attraction and then to something far deeper, Savannah learns that in life nothing worth having comes easily. She also discovers that some dreams really are forever.
A novel of uncommon grace and power, “Far Harbor” is at once a poignant love story and an emotion-packed account of one woman’s journey home.
You can read an excerpt HERE
About the Author
JoAnn Ross is a favorite the world over. She is a recipient of numerous writing awards, including being named Storyteller of the Year by Romantic Times, and her work has been excerpted inCosmopolitan and featured by the Literary Guild book club. She is currently at work on Fair Haven, her next novel for Pocket Books.
Until 7.10.12 you can get these eBooks for only $3.99 each at your favorite retailers…..or use my Amazon links below!