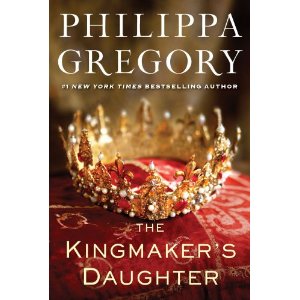 Publication Date: August 14, 2012 | Series: The Cousins’ War
In The Kingmaker’s Daughter, #1 New York Timesbestselling author Philippa Gregory presents the riveting story of Anne Neville, her sister Isabel, and their ever-changing fortunes.The Kingmaker’s Daughter is the gripping and ultimately tragic story of the daughters of the man known as the “Kingmaker,” the most powerful magnate in England through the Cousins’ Wars. In the absence of a son and heir, he uses the two girls as pawns in his political games, but they grow up to be influential players in their own right. In this novel, her first sister story since The Other Boleyn Girl, Gregory explores the lives of two fascinating young women.     At the court of Edward IV and his beautiful queen, Elizabeth Woodville, Anne grows from a delightful child brought up in intimacy and friendship with the family of Richard, Duke of Gloucester, to become ever more fearful and desperate when her father makes war on his former friends. Her will is tested when she is left widowed and fatherless, with her mother in sanctuary and her sister married to the enemy. Fortune’s wheel turns again when Richard rescues Anne from her sister’s house, with danger still following Anne, even as she eventually ascends to the throne as queen. Having lost those closest to her, she must protect herself and her precious only child, Prince Edward, from a court full of royal rivals.
About the Author
Philippa Gregory is the author of several bestselling novels, including The Other Boleyn Girl. She studied history at the University of Sussex and received a Ph.D. from the University of Edinburgh. Visit her website at PhilippaGregory.com.