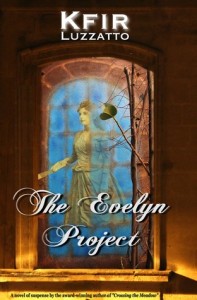 Publication Date: April 1, 2012
A loving father’s cry for help gets into the wrong hands, and a hundred years later things get out of control. Evelyn’s father did everything in his power to save his dying daughter, black magic included. But when a century later his plea for help gets into the wrong hands, all hell breaks loose. Caught in the slippery battlefield between the Vatican and a cult that wants to change the past, a young Italian professor and a beautiful French aspiring actress are too busy running away from murder and conspiracy to let physical attraction develop into love. And it doesn’t help that the Her Majesty’s Secret Service decides to take an interest in what everybody else is doing and to pull some strings of its own. Quite the contrary, in fact… This is another original thriller by the award-winning author of “Crossing the Meadow” (“Very good read! Mystery with just the right touch of the supernatural. I’ll remember this story for a long time to come. Highly recommended.” – Shirley Priscilla Johnson – Midwest Book review) and of “The Odyssey Gene” (“Kfir Luzzatto brings us a great story with masterful descriptions, and a story that keeps the reader thinking.” – Brian Vuyk, The Science Fiction Review.) Suspense and action are dealt out in this intriguing thriller that runs in parallel in two different centuries, without for a moment forgetting the laws of attraction that turn the story into an intimate affair.

Kfir Luzzatto was born and raised in Italy, and moved to Israel as a teenager. He acquired the love for the English language from his father, a former U.S. soldier, a voracious reader and a prolific writer. Kfir has a PhD in chemical engineering and works as a patent attorney. He lives in Omer, Israel, with his full-time partner, Esther, their four children, Michal, Lilach, Tamar and Yonatan, and the dog Elvis. Kfir has published extensively in the professional and general press over the years. For almost four years he wrote a weekly “Patents” column in Globes (Israel’s financial newspaper). His non-fiction book, THE WORLD OF PATENTS, (a not-so-boring tale of what patents are about, in Hebrew) was published in 2002 by Globes Press. He is the author of several short stories but now mostly writes full-length fiction. His first novel, CROSSING THE MEADOW was published by Echelon Press (October 2003) and was voted “BEST HORROR NOVEL” in the 2003 Preditors & Editors Readers Poll. Kfir is an HWA (Horror Writers Association) and ITW (International Thriller Writers) member and also serves on the editorial board of The Harrow Press as Anthology Editor. His second novel, THE ODYSSEY GENE, was published by Echelon Press (July 2006) and was a finalist in the Indie Excellence 2007 Book Awards. He got the inspiration for his new thriller, “THE EVELYN PROJECT”, from an in-depth research into the family archives.


You can visit Kfir’s web site and read his blog at www.kfirluzzatto.com
Follow him on Twitter (@KfirLuzzatto)
Fan him on Goodreads HERE
SOURCE:  AUTHOR
MY THOUGHTS
REALLY LIKED IT
Evelyn is near death when her father tries a last ditch effort to save her from tuberculosis by visiting a medium during the late 1800s in Italy.  The medium, who denies being a witch, learns the secrets of how to save her from speaking with the dead. Flash forward to current time and her only remaining relative, Franco, a Latin professor in England.  He is contacted by a multimillionaire, Easby who wants to change history by inserting some small change in the past.  He attempts to try corrupting the past by saving Evelyn from her death when a letter her father writes explaining the blood magic necessary falls into his hands. So by recreating her illness in another in current times and bringing Franco together with replacement, he hopes that history will be changed when the substitute for Evelyn in modern times is cured.


This story is sort of like the DaVinci Code, where there is plenty of action, car chases, Vatican and English involvement with a mystery of ancient sorcery and  cults.  Each side trying to play the other, while one man tries to figure out exactly what is happening by shear willpower and reasoning.  The story flips back and forth between the past and current to help move the story forward which works.   There is also a romance worked in with Eva, who is a temptress/actress and her interactions with Franco really make you wonder whose side she is really on.  Then there is Kathia, whose sister is killed by a cult so she wants to hunt them all down but meets a lot of roadblocks.


I had a bit of a struggle with the dialogue but once I got over what seemed a bit of “lost in translation” issues, that the whole thing really moved along. There is the bad guy with no conscious sent out to kill the hero and the crazy rich guy bent on changing history through any means possible and a bunch of conspiracy theories that will have you guessing until the very end.  Franco is quite likable and you want to cheer him on to solve the whole thing and live a happy life.  Overall, thriller/mystery fans who like a bit of paranormal should enjoy this quick read.