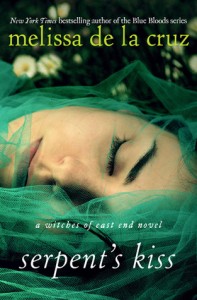 Publication Date: June 12, 2012 | Series: Witches of East End
The intriguing Beauchamp family, introduced in the New York Times bestselling Witches of East End, returns in Serpent’s Kiss, with dizzying plot twists and spellbinding magic.Joanna and her daughters, bookish Ingrid and wild-child Freya, are just settling into the newfound peace that has been cast over their small, off-the map town of North Hampton. With the centuries-old restriction against practicing magic lifted, casting spells, mixing potions, and curing troubled souls has never felt so good for the three witches. That is, until everything gets turned upside down–from Joanna’s organized kitchen to Ingrid’s previously nonexistent love life to Freya’s once unshakeable faith in her sexy soul mate, Killian Gardiner.When Freya’s twin brother, Freddie, suddenly returns, escaped from Limbo and professing innocence on a long-ago crime, Freya should be ecstatic. The golden boy can do no wrong. Or can he? Freddie blames no other than her fiance Killian for his downfall, and enlists Freya’s help to prove it. Now Freya doesn’t know who to believe or trust.And for the first time in–well, forever, really–Ingrid is also busy in love. Matt Noble, the handsome and charming police detective, has won her heart. But can romance work between a virgin witch and a mortal who doesn’t believe in magic? Things get even more complicated when it appears Ingrid is harboring the prime suspects in Matt’s police investigation. To add to the chaos, a dead spirit is attempting to make contact with Joanna–but does it mean to bring harm or help? Joanna asks her sort-of ex-husband Norman to help figure it out, only to accidentally invite him to a Thanksgiving dinner with a dapper gentleman she’s recently begun dating. As the witches pull together to discover the serpent within their midst and the culprit behind Freddie’s imprisonment, everything is thrown into peril. Will the discovery come too late to save those they love most?Melissa de la Cruz weaves all this and more in a blockbuster sequel that is not to be missed by her fans, and one that is sure to enchant new readers of the series.
About this author

Melissa de la Cruz is the New York Times and USA Today best-selling author of many critically acclaimed and award-winning novels for teens including The Au Pairs series, the Blue Bloods series, the Ashleys series, the Angels on Sunset Boulevard series and the semi-autobiographical novel Fresh off the Boat.

Her books for adults include the novel Cat’s Meow, the anthology Girls Who Like Boys Who Like Boys and the tongue-in-chic handbooks How to Become Famous in Two Weeks or Less and The Fashionista Files: Adventures in Four-inch heels and Faux-Pas.

She has worked as a fashion and beauty editor and has written for many publications including The New York Times, Marie Claire, Harper’s Bazaar, Glamour, Cosmopolitan, Allure, The San Francisco Chronicle, McSweeney’s, Teen Vogue, CosmoGirl! and Seventeen. She has also appeared as an expert on fashion, trends and fame for CNN, E! and FoxNews.

Melissa grew up in Manila and moved to San Francisco with her family, where she graduated high school salutatorian from The Convent of the Sacred Heart. She majored in art history and English at Columbia University (and minored in nightclubs and shopping!).

She now divides her time between New York and Los Angeles, where she lives in the Hollywood Hills with her husband and daughter.

Contest is open to anyone over 13 years old with a US mailing address
(sorry, NO PO Boxes)
Contest ends on 7.18.12 Winner will be chosen by Random.org
Winner will have 48 hours to respond to email or a new winner will be chosen.
Only one winner per household address.
This giveaway is sponsored by THE PUBLISHER and ONE book is available.
Be sure to enter over at my YA blog for another copy HERE!
Complete the below form
Follow Me
Extra Entries
+1 Be my friend on GoodReads HERE
+1 Follow me on Twitter HERE
+1 Like Win a Book on Facebook HERE
+ Like the new BookHounds Facebook page HERE
+1 SOCIAL NETWORK THIS GIVEAWAY!  Get one additional entry for each post on the social network of your choice, one per site, per day.
+1 leave a comment- you can do this daily!
MORE EXTRA ENTRIES FOR MELISSA DE LA CRUZ
+1 Visit the  Website: HERE
+1 LIKE  on Facebook: HERE
+1 Follow on  Twitter:  HERE
+1 Fan on Goodreads HERE