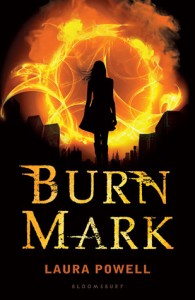 Publication Date: June 19, 2012
In a modern world—where witches are hunted down and burned at the stake—two live interact. Glory is from a family of witches, and is desperate to develop the ‘Fae’ and become a witch herself. Lucas is the son of the Chief Prosecutor for the Inquisition and his privileged life is very different from the witches he is being trained to prosecute. And then one day, both Glory and Lucas develop the Fae. In one fell stroke, their lives are inextricably bound together, whether they like it or not.


About the Author
LAURA POWELL spent most of her childhood with her nose in a book. She went on to study Classics at Bristol and Oxford, then spent five years working in the editorial departments of both adult and children’s publishers. Laura is the author of two thrillers for teen readers, Game of Triumphs and Master of Misrule.
SOURCE: PUBLISHER – NETGALLEY
MY THOUGHTS
REALLY LIKED IT
The story focuses around Glory, a fifteen year old witch (or fae) that comes from a long line of spectacular witches and Lucas, who is the teen son of the chief inquisitor and shows a bit of witch in himself, something that causes major dilemmas within himself.  The back story is that it is modern times and witches are practicing in public, but like anyone, there are good and bad.  The bad use their skills for crime and ill gotten gain.  The worst of these have bound together in gangs to control the worst of society.  Lucas’ father is the officer in charge of bringing the law breakers to justice and at times, put them to death by burning for capital crimes.
There are parts of this story that reminded me a bit of Harry Potter mixed with the thieving gangs of Oliver Twist and definitely good versus evil but even that is mixed with shades of gray.  I did get bogged down a bit by some of the very descriptive scenarios in some parts but that could be me. I have never been one for a lot of wordy descriptions and I am more of a dialogue person.  Glory’s wit made up for a lot of that.  Lucas coming into his own as a fae even while he is trying to hide it made me like him even more.  When the two get together and uncover some really interesting conspiracy theories the story really took off.
Oh, and there are a LOT of characters to keep track of.  Glory’s gang of a family is complete with cockney accents while her other cousins are rich and posh.  Lucas has his father and while his sister annoys him, she could be a standout later in this series. There are other minor ministers as well who try to thwart the two on their quest for the truth.  Overall, there are some mentions of alcohol and drug abuse, some PDA and violence that is not that graphic, well, except for the recurrent theme of witches being burned at the stake.