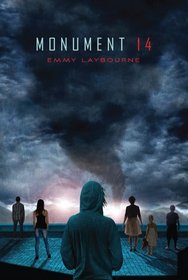 Publication Date: June 5, 2012
Your mother hollers that you’re going to miss the bus. She can see it coming down the street. You don’t stop and hug her and tell her you love her. You don’t thank her for being a good, kind, patient mother. Of course not—you launch yourself down the stairs and make a run for the corner.Only, if it’s the last time you’ll ever see your mother, you sort of start to wish you’d stopped and did those things. Maybe even missed the bus.But the bus was barreling down our street, so I ran.Fourteen kids. One superstore. A million things that go wrong. In Emmy Laybourne’s action-packed debut novel, six high school kids (some popular, some not), two eighth graders (one a tech genius), and six little kids trapped together in a chain superstore build a refuge for themselves inside. While outside, a series of escalating disasters, beginning with a monster hailstorm and ending with a chemical weapons spill, seems to be tearing the world—as they know it—apart.
About the Author
Emmy Laybourne is a screenwriter, lyricist, and actress. She has acted in movies, television, and improv groups including Chicago City Limits. She lives in Chestnut Ridge, New York, with her husband and their two children. Monument 14 marks her fiction debut. Visit her online at www.emmylaybourne.com.
SOURCE:  PUBLISHER
MY THOUGHTS
ABSOLUTELY LOVED IT


At the end of the world, most experts agree that the safest place to hole up in case of an attack would be a big box or warehouse store since it can be secured and there are plenty of supplies.  Well, when massive natural disasters strike the world, fourteen kids are stuck inside one of these stores with no adults or communication to the outside world.  So when a group of kids ranging from kindergarten to high school end up inside a super store after their bus crashes during a freak hailstorm, it is only the beginning of an adventure in survival.  Oh, and a weapons spill only creates more danger for the group when their effects become known and the chemicals cause rage and hallucinations in certain blood types.


The story centers around Dean and his tech-brilliant brother, Alex and how they try to make the best of a bad situation to keep the group cohesive and alive.  Two jocks, Jake and Brayden only want to drink alchohol and fool around, doing little to help the group survive, so it is no big surprise that they cause a lot of problems for the group.  Josie, has been injured initially but when she finally comes around, she shows her leadership skills and make a home for the younger kids.  Astrid, the high school hottie and Sahalia, who wants to be older than her thirteen, pretty much temp the guys and without even realizing it bring upon some unwanted attention when two outsiders show up.


So much happens in this story but it all devolves into a sort of Lord of the Flies scenario between the older boys until one of them dies.  Everything in the plot is very fast paced and the descriptions are perfectly phrased so that everyone gets their full due without being overly wrought out.  Even the younger kids are memorable but I don’t have enough space to go into full detail about them.  The kids do have a bit of contact with the outside world through an old television set but when that is damaged, they must figure things out on their own.  There is a good opening for a follow up to another which I have learned will be out in 2013.  I would recommend this for teens and there are mentions of alcohol, drugs, sexual situations, some violence and language.