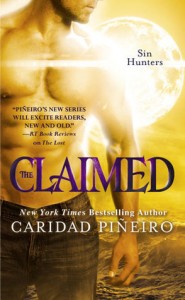 Victoria Johnson loves her life. She’s her own boss in a quaint beachside town, and has great friends who keep her grounded. If only they knew who she really is: an heiress to an ancient race who possesses astonishing superhuman powers. It’s Victoria’s duty to restore her clan of Light Hunters to their former glory by choosing the perfect mate. In Christopher Sombrosa, she just may have found him. Strong, smart, and successful, Christopher exudes a powerful energy. Their connection is sensual, irresistible-and forbidden.

I’ve been reading romances for as long as I can remember, going back to when I was twelve and read and re-read WUTHERING HEIGHTS all summer long.  At one point the the librarian told me I could not take the book out again since other people needed a chance to read it!

Denied my broody Heathcliff and doomed Catherine, I turned my attentions to what some might say were an odd mix:  Shakespeare and Ian Fleming.

It’s safe to say that those choices as a young reader were later reflected in what I wrote, especially in THE CLAIMED, the second book in the Sin Hunters series.

Action.  Adventure. Angst.  I’ve incorporated all those elements that I love into this tale of a determined and broody alpha hero, Christopher Sombrosa, and a woman who is the absolute wrong choice for him, Victoria Johnson.

So why is Victoria not the woman for Christopher?  Think Romeo and Juliet, Capulet and Montague.

Victoria is destined to be the leader of her Light Hunter clan while Christopher is not only one of the Dark Ones, he is likewise supposed to assume command of his Shadow Hunter people.

Add to the mix some rather nefarious villains in the form of Christopher’s father and ex-fiancée and the betrayal of someone dear to Victoria, and I think you’ll find THE CLAIMED will keep you turning pages until the very end.

I am very glad to say, however, that despite the hopeless Catherine, Juliet, and assorted Bond girls who could never win James’s heart, there is a path to a new and exciting place for Christopher and Victoria.

I hope you will enjoy their fight for a better tomorrow for not only themselves, but their race of Hunters.

Caridad Piñeiro is a New York Times and USA Today bestselling author who wrote her first novel in the fifth grade when her teacher assigned a project: Write a book for a class lending library. Her love of writing continued through high school, college, and law school. Shortly after the birth of her daughter, her passion for the written word led to a determination to publish and share the stories she loved with others. In 1999, Caridad’s first novel was released, and a decade later she is the author of more than twenty novels and novellas. Caridad hopes to continue to share her stories with readers all over the world for years to come. When not writing, Caridad is an attorney, wife, and mother to an aspiring writer and fashionista.

SOURCE: AUTHOR
MY THOUGHTS
LOVED IT


Victoria is set to run the clan of the Light Hunters as well as mating with an perfect choice and protect humans from the Shadow Hunters.  Both groups can draw power from the elements but the Shadow Hunters prey on humans and the Light Hunters to gather their strength.  Her clan seeks to keep the Shadow Hunters in check.  Christopher is of the Shadow clan and he a few of his companions have discovered the ways of the Light Hunters by feeding on the elements instead of others and thus avoiding the virus that is claiming the members of his tribe.  Of course she is thrown together with Christopher in a Romeo and Juliet setting instead of her intended mate of Adam.  Of course, there are factions that would rather not have these two together like Chirstopher’s ex, Maya who reminded me a bit of Jessica Rabbit (I’m not bad, I’m just drawn that way) and Rafael, her guard.


Even though this is a paranormal romance, this story would still be a wonderful sci-fi fantast if it were left out.  The romance actually enhances the supernatural elements of the tale.  I thought is was really a nice touch when the two lovers combined auras instead of the full on typical love story.  Sammi is probably my favorite minor character with her roller derby ways and that she turns out to be more than just Victoria’s friend.  I hope the next installment will explore more of her background since what is alluded to in this one is quite interesting.  Fans of Gena Showalter and Larissa Ione should really enjoy this series.