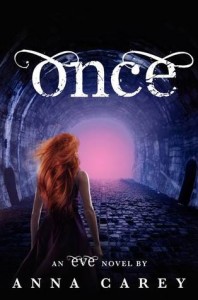 Publication Date: July 3, 2012 | Series: Eve
Sixteen years have passed since a deadly virus wiped out most of the Earth’s population. After learning of the terrifying part she and her classmates were fated to play in the rebuilding of New America, eighteen-year-old Eve fled to the wilds and Califia, a haven for women determined to live outside the oppressive rule of the king of New America. However, her freedom came at a price: she was forced to leave Caleb, the boy she loves, wounded and alone at the city gates. Eve quickly learns that Califia may not be as safe as it seems and soon finds herself in the City of Sand and the palace of the king. There she uncovers the real reason he was so intent on her capture, and the unbelievable role he intends her to fill. When she is finally reunited with Caleb, they will enact a plan as daring as it is dangerous. But will Eve once again risk everything—her freedom, her life—for love?Brimming with danger and star-crossed romance, and featuring a vivid dystopian landscape, this electrifying follow-up to Eve, which bestselling author Lauren Kate called “a gripping, unforgettable adventure—and a fresh look at what it means to love” is sure to appeal to fans who crave the high-stakes adventure of The Hunger Games and the irresistible love story of Romeo and Juliet.
About the Author
Anna Carey graduated from New York University and has an MFA in fiction from Brooklyn College. She lives in Los Angeles.


SOURCE: Around the Wrold ARC Tours


MY THOUGHTS
LOVED IT


Once picks up right where Eve left off.  Eve is now in Califia (really San Francisco), and although she can’t see Caleb, they find a way and conspire to escape when Eve overhears the women conspire to turn her over to the king of New America.  Well, she tries to escape but is captured and taken to the city in the sand (really Las Vegas).   She does reunite with Arden right before her escape and Arden is also captured and returned back to the “school” .  Eve finally meets the King who pronounces her his daughter (ok–no way to explain my thoughts without this fact) and she is declared the Princess and renamed Genevieve.  Trumpets blare, fanfare erupts and Eve throws a hissy fit but at this point she is entitled (literally).


Still, Eve is convinced that the King’s vision for a New America involves some really shady, dictator like stuff that is truly evil and she wants no part of it except to bring him down.  Can you say “major daddy issues”?  She escapes the palace (really Cesar’s Palace — bonus points!) and reunites with Caleb after doing some recon and helping out the resistance.  So you have the basic Romeo and Juliet plot going on here with some end of world dystopian, science fiction elements.  Oh and Eve is forced to marry some rich dude in charge of redevelopment.


I have to admit I LOVED this book.  I gave the first book, Eve, 5 stars, but this follow up was a bit predicable for me.  Even though I read it straight though and it really help my attention, some of the plot points were a bit convenient.  I kept expecting more from Caleb but this book is all about Eve.  She doesn’t need any knight in shining armor to rescue her and I have high hopes for the third book in the trilogy. I know what I want, now lets see if I get it next year.