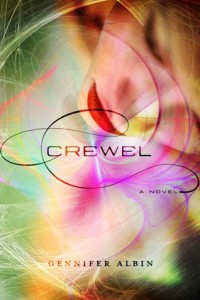 Publication Date: October 16, 2012 | Series: Crewel World
Incapable. Awkward. Artless.That’s what the other girls whisper behind her back. But sixteen year-old Adelice Lewys has a secret: she wants to fail.Gifted with the ability to weave time with matter, she’s exactly what the Guild is looking for, and in the world of Arras, being chosen as a Spinster is everything a girl could want. It means privilege, eternal beauty, and being something other than a secretary. It also means the power to embroider the very fabric of life. But if controlling what people eat, where they live and how many children they have is the price of having it all, Adelice isn’t interested.Not that her feelings matter, because she slipped and wove a moment at testing, and they’re coming for her—tonight.Now she has one hour to eat her mom’s overcooked pot roast. One hour to listen to her sister’s academy gossip and laugh at her Dad’s stupid jokes. One hour to pretend everything’s okay. And one hour to escape.Because once you become a Spinster, there’s no turning back.
About the Author
Gennifer Albin holds a masters degree in English Literature from the University of Missouri. During her student years she served as an editor for Pleaides and The Missouri Review, and since then she’s founded the tremendously popular blog theconnectedmom.com.
SOURCE:  AROUND THE WORLD ARC TOURS
MY THOUGHTS
ABSOLUTELY LOVED IT


Adelice has been faking it for years, ignoring the gifts and powers she has over matter and time and taught by her parents to mask them.  Then she slips during testing and that night they come for her to be taken away from her home and placed with the Guild as a Spinster, those girls who can weave the fabric of everyday life in Arras.  The extraction doesn’t go according to plan and her parents try to escape and Adelice is caught anyway.  Now with her father dead and the status of her sister and mother unknown, Adelice discovers she is more powerful than any other at the Guild.  The Guild recognizes this as well and she is quickly brought up through the ranks even though her enemies try to sabotage her every move.


In the fascinating world of Arras, time and matter are woven together to create the space in which the people live and all by the spinsers who are said to be kept “pure”.  It is not necessarily a dystopian world but one where the people live unknowing of the apocalypse that befell the population previously.  This is more of a combination of science fiction and fantasy and the world, although much like earth, is just a bit different than what we know here.  I was quickly and painlessly taken to Arras and it was easy to accept.  Adelice has a lot of spunk and humor (super snark alert!) within her.  She stands up against the authoritarian figures of the ruling class much like Katniss in the Hunger Games.


Women are pretty much segregated from the population here and most are like Japanese office ladies which besides teachers and maids are the only careers they have as options.  Adelice sees the injustice and because her parents are a bit subversive, they secretly teach her that society shouldn’t be this way.  I think fans of Margaret Atwood are going to adore this one.  There isn’t anything for parents to worry about in this one except some alcohol consumption, some kissing, which was very brief and little violence.  Since the ending really surprised me, I can’t wait until the follow up –sigh — at least a year.