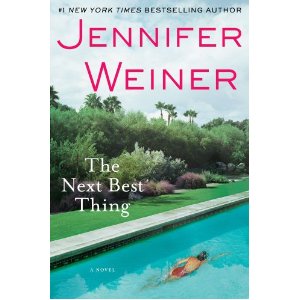 Publication Date: July 3, 2012
Actors aren’t the only ones trying to make it in Hollywood.…At twenty-three, Ruth Saunders left her childhood home in Massachusetts and headed west with her seventy-year-old grandma in tow, hoping to make it as a screenwriter. Six years later, she hits the jackpot when she gets The Call: the sitcom she wrote, The Next Best Thing, has gotten the green light, and Ruthie’s going to be the showrunner. But her dreams of Hollywood happiness are threatened by demanding actors, number-crunching executives, an unrequited crush on her boss, and her grandmother’s impending nuptials.Set against the fascinating backdrop of Los Angeles show business culture, with an insider’s ear for writer’s room showdowns and an eye for bad backstage behavior and set politics, Jennifer Weiner’s new novel is a rollicking ride on the Hollywood roller coaster, a heartfelt story about what it’s like for a young woman to love, and lose, in the land where dreams come true.


Jennifer Weiner is the author of ten novels, including In Her Shoes, which was made into a major motion picture, and was the co-creator and executive producer of the ABC Family sitcom State of Georgia, which ran during the summer of 2011. She lives with her family in Philadelphia.

OHHH — Jennifer and the Hollywood years!  I can just bet there are some true to life details in this story.  I was a fan of State of Georgia — sad that it didn’t make it.