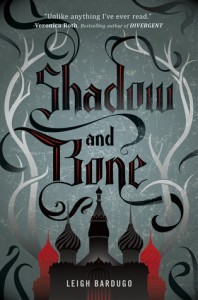 Publication Date: June 5, 2012 | Series: The Grisha Trilogy
Surrounded by enemies, the once-great nation of Ravka has been torn in two by the Shadow Fold, a swath of near impenetrable darkness crawling with monsters who feast on human flesh. Now its fate may rest on the shoulders of one lonely refugee.
Alina Starkov has never been good at anything. But when her regiment is attacked on the Fold and her best friend is brutally injured, Alina reveals a dormant power that saves his life—a power that could be the key to setting her war-ravaged country free. Wrenched from everything she knows, Alina is whisked away to the royal court to be trained as a member of the Grisha, the magical elite led by the mysterious Darkling.
Yet nothing in this lavish world is what it seems. With darkness looming and an entire kingdom depending on her untamed power, Alina will have to confront the secrets of the Grisha…and the secrets of her heart.

Leigh Bardugo was born in Jerusalem, raised in Los Angeles, and graduated from Yale University. She is fond of glamour, ghouls, and costuming, and gets to indulge all of these fancies in her other life as a makeup artist. She can occasionally be heard singing with her band, Captain Automatic.


Alina and her best friend, Mal, grow up in an orphanage under the patron of a local duke during a time of encroaching darkness from a place known as the Fold.  A shadowy area where Ravka has been sliced in two and is populated by creatures who feast on humans trying to cross.  The both join the military since there are few outlets to earn a living.  They both failed the test to become Grisha and join the magical elite that would have opened up an easier life.  While on a crossing through the Fold, the pair is attacked and Alina brings forth a power that saves Mal’s life and throws her right in the middle of a major power struggle.


First off, I was so drawn into this world of magic and evil with such amazingly strong characters so quickly that I found myself going back and rereading passages just to make sure I didn’t miss anything. Everything seemed to move so effortlessly that I found it hard to put the book down once I started it.  The dynamic between Alina and Mal was one that was cleverly scripted and would really translate to the screen well.  She has longed for him since they were children and when they are separated, it pains her to no end when she realizes those feelings aren’t returned.  So she does what any teen would do, go for the older guy with power that has seduced her.  The Darkling has taken her under his wing and wants her to develop her powers (sorry, I know I am being vague about those so you read the book!), and has that cover of goodness that makes her unable to see the evil lurking inside until it is almost too late.


The descriptions are equally matched with the believable dialogue and all seem to have a somewhat Russian flavor.  I am not a huge fan of descriptive prose, but Bardugo nails everything with a concise and elegant tone that made me want to linger over each scene that she depicts.  You can feel what Alina is conflicted about and how everything affects her.  Oh!  I want more of this series.  I know there are two more books to come and they won’t be here soon enough.  The pacing is just amazing as well since it doesn’t drag at any part.  If you are a fan of Philip Pullman’s Golden Compass series, you are going to love this one as well.