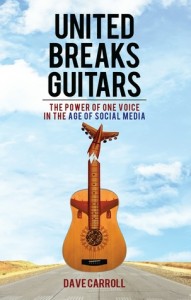 Publication Date: May 15, 2012
Songwriter Dave Carroll wasn’t the first person abused by an airline’s customer service. But he was the first to show how one person, armed with creativity, some friends, $150, and the Internet, could turn an entire industry upside down.            United Airlines had broken Dave’s guitar in checked luggage. After eight months of pestering the company for compensation, he turned to his best tool—songwriting—and vowed to create a YouTube video about the incident that he hoped would garner a million views in one year. Four days after its launching, the first million people had watched “United Breaks Guitars.” United stock went down 10 percent, shedding $180 million in value; Dave appeared on outlets as diverse as CNN and The View. United relented. And throughout the business world, people began to realize that “efficient” but inhuman customer-service policies had an unseen cost—brand destruction by frustrated, creative, and socially connected customers.            “United Breaks Guitars” has become a textbook example of the new relationship between companies and their customers, and has demonstrated the power of one voice in the age of social media. It has become a benchmark in the customer-service and music industries, as well as branding and social-media circles. Today, more than 150 million people are familiar with this story.            In this book, you’ll hear about how Dave developed the “just do it” philosophy that made him the ideal man to take on a big corporation, what it felt like to be in the center of the media frenzy, and how he’s taken his talents and become a sought-after songwriter and public speaker. And businesspeople will learn how companies should change their policies and address social-media uprisings.            Since “United Breaks Guitars” emerged, nothing is the same—for consumers, for musicians, or for business. Whether you are a guitarist, a baggage handler, or a boardroom executive, this book will entertain you and remind you that we are all connected, that each of us matters, and that we all have a voice worth hearing.
About the Author
Dave Carroll is a singer-songwriter and social media innovator from Halifax, Canada. Following his 2009 YouTube music video release called “United Breaks Guitars,” about his poor customer service experience with United Airlines, Dave’s career blossomed and he is now a highly-sought-after performer, content creator, author, keynote speaker, and consumer advocate.


Dave Carrolll has endured every musician’s nightmare:  his guitar, his baby, was tossed and broken by the baggage handlers on a United flight.  He honestly tried to get satisfaction from the company, but they pretty much ignored him.   He wrote out a plan, which is really impressive, and followed through on each step that he thought out.  He would be polite, try to resolve the issue and settle for a sum which would not even begin to cover the repair.   So he did what any musician worth his salt, he wrote a song about it and put it on You Tube.  His only goal was to get a million views on a trilogy of songs documenting his quest for satisfaction. It received more than that in just four days.


Carroll was thrown into a media whirlwind and knowing just enough, he bravely took it on and tried to get United to understand that the way they were treating their customers was wrong.  His battle with them became a text book case of consumer affairs and what not do in public relations if you are a major corporation in this day of social media.  I have to say that this book is exceptionally well written and very enjoyable.  What made it very special is that it tells a story and makes his experiences very easy to relate to.  I mean, who hasn’t been abused by an airline, but the way Carroll responded should be a lesson for the consumer and the corporation.  The smart ones pay attention and try to fix it, especially in this day of social media where every one really has a voice.