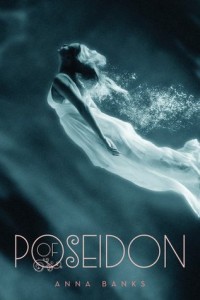 Publication Date: May 22, 2012
Galen, a Syrena prince, searches land for a girl he’s heard can communicate with fish. It’s while Emma is on vacation at the beach that she meets Galen. Although their connection is immediate and powerful, Galen’s not fully convinced that Emma’s the one he’s been looking for. That is, until a deadly encounter with a shark proves  that Emma and her Gift may be the only thing that can save his kingdom. He needs her help–no matter what the risk.

Anna Banks grew up in a small town called Niceville (yes, really). She now lives in Crestview, Florida, with her husband and their daughter. This is her debut novel.
SOURCE:  PUBLISHER
MY THOUGHTS
LOVED IT
Emma is a klutz, pure and simple, so when she goes goes on vacation to Florida with her BFF, Chloe, she runs smack into the cutest guy she has ever seen.  Chloe is unfortunately attacked by a shark and Emma orders the shark away it listens!  She doesn’t quite get this at first especially since Chloe dies of her wounds.  Galen, the cute dude, is searching for her but doesn’t realize Emma is the one he is looking for until the incident.  He turns out to be Syrena (merman) and it turns out Emma is a decedent of Poseidon which gives her the ability to communicate with fish.  Which puts them on a crash course towards intimacy or at least Galen must convince her that she is special.  The story is told in alternating view points between Galen and Emma which is quite insightful.
There are also wonderful secondary characters like Rayna, Galen’s twin sister and her boyfriend, Toraf.  Rayna is a total you-know-what, while Toraf is a giant sweetie with the ability to track anything under the sea. Ok, stop singing the annoying Disney song right now!  And just like in a Disney film, the mothers are nonexistent.  Rayna speaks her mind and doesn’t keep anything a secret which is something Galen is way too good at.  He must convince Emma that she is stronger than she thinks and her destiny is something that must be fulfilled.  Of course,  they fall for each other and it looks like they will never get together but like in any good fairy tale there are obstacles that each must overcome.  I have to say the chemistry between the two is extremely well done!
Overall, I really enjoyed this sweet read.  This is only one of three mermaid tales that I have really enjoyed.  You can check out MaryJanice Davidson’s adult one about Fred or Tera Lynn Childs’ fantastic YA series about Lily.  There is a lot of heavy petting and a mention or two of alcohol but nothing really serious.  Um, launguage, yes, Emma does have a mouth at times but only at appropriate times.  I guess this is one for more mature teens.  I can’t wait for the next one to arrive sometime in the future!