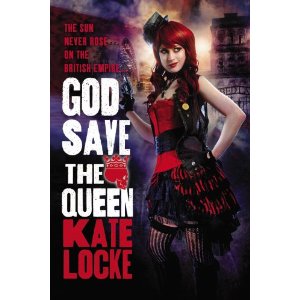 The undead matriarch of a Britain where the Aristocracy is made up of werewolves and vampires, where goblins live underground and mothers know better than to let their children out after dark. A world where being nobility means being infected with the Plague (side-effects include undeath), Hysteria is the popular affliction of the day, and leeches are considered a delicacy. And a world where technology lives side by side with magic. The year is 2012 and Pax Britannia still reigns.

Xandra Vardan is a member of the elite Royal Guard, and it is her duty to protect the Aristocracy. But when her sister goes missing, Xandra will set out on a path that undermines everything she believed in and uncover a conspiracy that threatens to topple the empire. And she is the key-the prize in a very dangerous struggle.

Kate Locke is a shameless anglophile who wrote her first book at age 12. Fortunately, that book about a British pop band is lost forever. When not experimenting with new hair colors, Kate likes to hang out with her husband who, while not from England, can do a pretty convincing accent. She spends her days being bossed about by 5 fur kids and making stuff up — often while wearing a ‘uniform’ that looks suspiciously like pajamas. During ‘off’ hours Kate often screeches along to Rock Band (being a rock star was her second career choice if the writing thing didn’t work out), watches BBC America, or plays with makeup. She loves history, the paranormal, horror, and sparkly things. The author’s website can be found at www.katelocke.com.

Oh HOW FAB does this book sound?  I was trolling around Amazon and came upon it.

If any of my bloggy friends happen to be at BEA next week, PLEASE check her out and give me a full report! I would just adore an ARC of this one.

June 6, 2012
Book Expo America, Javits Center, NYC – Kate will be signing GOD SAVE THE QUEEN at the Orbit Booth at 4 pm.