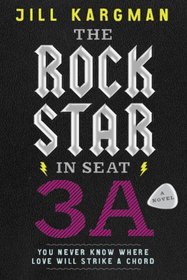 Publication Date: May 22, 2012
It’s Hazel’s thirtieth birthday and she has everything she’s ever wanted: a kickass job, a dream apartment in New York City, and the perfect boyfriend—who’s just days away from proposing. Hazel thinks she’s happy but isn’t quite ready to settle down. So when her most far-fetched fantasy enters the realm of the possible, shouldn’t she drop everything to see it through?The morning after her birthday, Hazel boards a flight to L.A. only to get the surprise of her life. When she’s bumped up to first class, extra legroom and free drinks are absolutely the last things on her mind when she catches sight of her seatmate: her all-time biggest celebrity crush, rock star Finn Schiller! Only the night before she’d confessed her infatuation with the gorgeous musician, and her boyfriend joked that she had a free pass if she ever met him. Hazel can’t believe fate has actually thrown them together.Even more unbelievable is that during the flight they genuinely connect. Finn likes her uncensored cursing and wicked sense of humor, and that she’s unlike all of his groupies; Hazel likes his killer looks, ripped physique, and soulful music. But what started as a fantasy quickly becomes a real attraction, and after a dream date and taste of the rock-star life with Finn in L.A., Hazel is forced to examine the track her life is on. Indulging in a passionate affair with a rock star seems crazy—but could she ever forgive herself if she walked away from her wildest dream coming true? And is her wildest dream the stuff that happiness is made of?A lively novel about a down-to-earth New York City girl who suddenly finds herself in a rock ‘n’ roll Cinderella fantasy, The Rock Star in Seat 3A is seasoned with Jill Kargman’s signature wit and hilarious dialogue. This is a fairy-tale romance with a twist.

Jill Kargman is the New York Times bestselling author of nine books, including The Right Address, Wolves in Chic Clothing, Momzillas, and The Ex-Mrs. Hedgefund. Her last effort is a nationally bestselling book of essays, Sometimes I Feel Like a Nut. She is also a featured writer for Vogue, Harper’s Bazaar, Town & Country, and Elle, and a copywriter for her greeting card company, Jill Kargman Etceteras.


As Hazel approaches her thirtieth birthday, she offhandedly comments that her “free pass* would be Finn Schiller, of the band The Void.  In a really happy and committed relationship with Wylie and a kick ass job as a publicist for the hottest game company in the world, she realizes that she doesn’t have time to sow her wild oats and must really decide whether she wants to settle and settle down.  Then, fate intercedes and she ends up on a flight sitting right next to her crush.  Just as her boyfriend is about to propose, she jets off with the rock star.  Sex ensues, as well as a whirlwind courtship between Finn and Hazel but when she starts to figure out that life on the road isn’t for her, she becomes un-starstruck while hitting the ground full force.


This is the book I would write if I could write.  I am so envious that Jill Kargman put all of my best rock and roll thoughts on paper.  Kargman is one of those authors that I crave to read and she didn’t disappoint me with her latest.  Even though it is a quick read, every word is used to maximize the story.  Hazel is someone you can really relate to and probably someone you know.  She can’t keep her thoughts to herself and has put her foot in her mouth more than once and you love her for it.  I love the fact that Hazel realizes that reality is not the life of a rock star and she would much rather live on earth rather than in a bubble.  If you are looking for the best read of the summer, here it is!