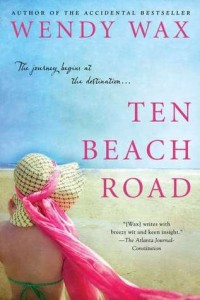 When Wendy Wax introduced Madeline Singer, Avery Lawford and Nicole Grant and shared their story of friendship, family and triumph in TEN BEACH ROAD, USA Today cited the book as one of “six that belong in your beach bag.” Now, this highly praised novel, which has already gone back to press seven times since its original trade paperback publication, is also available as a mass market paperback reprint on sale nationally.
Wax set TEN BEACH ROAD at two of her favorite spots in the world—St. Pete Beach, the city in which she was raised, and the famous Pass-a-Grille beach—where she brings together three women, thrown together by fate, and challenges them with choices that will change their lives.
Madeline, Avery and Nicole are very different from one another. Madeline is a homemaker coping with an empty nest and an unemployed husband. Avery is an architect. At least she was until she ended up as the sidekick on her ex-husband’s television program—the one she created, sold and co-hosted. Nicole, dating guru, matchmaker extraordinaire and founder of Heart, Inc., is living in the shadow of her biggest mistake—trusting her only brother. All are at the end of their financial ropes, the victim’s of a Bernie Madoff-style Ponzi scheme. All they have left is shared ownership of the once-glorious Bella Flora mansion, now a beachfront ruin.
Madeline, Avery and Nikki have to make a choice—cut their losses and sell the historic property for whatever amount of money they can get or trade sweat equity for the backing of a local contractor in order to restore it and their bank accounts. The women choose to save Bella Flora. There amidst the rubble and former glory, in the midst of a
sweltering summer and the backbreaking tasks of renovation, they begin to redefine themselves, and to discover their own strength and the power of friendship. Then, as Bella Flora again stands magnificent and proud, secrets begin to pull them apart and fate steps in once more, ready to destroy everything they’ve built.
Once again, Wendy Wax has imbued the lives and dialogue of her protagonists with energy and insights that immerse readers in their story from the very start.
ABOUT WENDY WAX
A St. Pete Beach native and longtime Atlanta resident, Wendy is perhaps best known to readers for her exploration of women’s friendships and the emotional bonds tying people to their families, friends and work. Her writing has been called “entertaining and informative” (St. Petersburg Times) and The Atlanta Journal-Constitution
praised her “breezy wit and keen insight.”
Ten Beach Road, Wendy’s best selling novel to date, has gone back to press seven times since its first printing in May 2011, and is now available in a mass market paperback reprint edition, as well as its trade paperback and electronic formats. It is the first of Wendy’s novels to use her hometown as her primary setting.
Wendy has always been a voracious reader. Her love affairs with language and storytelling paid off beginning with her first shift at the campus radio station while studying journalism at the University of Georgia. She returned to her home state, and then studied in Italy before graduating from the University of South Florida and going to work for the Tampa PBS affiliate, WEDU-TV. She was best-known in the Tampa Bay area as the
host of Desperate & Dateless, a radio matchmaking program that aired on WDAE radio, and nationally as host of The Home Front, which aired on PBS television affiliates across the country.
The mother of a toddler and an infant when she decided to change careers to write professionally, Wendy has since written eight novels, including OCEAN BEACH, Ten Beach Road, Magnolia Wednesdays, The Accidental Bestseller (a Romance Writers of America Rita Award finalist), Leave It to Cleavage, 7 Days and 7Nights, and Single in Suburbia. Her work has been sold to publishers in ten countries and to the Rhapsody Book Club. Her novel, Hostile Makeover, was excerpted in Cosmopolitan magazine.