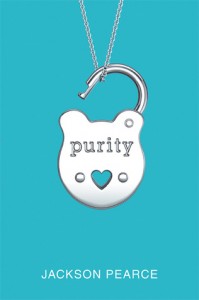 Publication Date: April 24, 2012
A novel about love, loss, and sex — but not necessarily in that order.

Before her mother died, Shelby promised three things: to listen to her father, to love as much as possible, and to live without restraint. Those Promises become harder to keep when Shelby’s father joins the planning committee for the Princess Ball, an annual dance that ends with a ceremonial vow to live pure lives — in other words, no “bad behavior,” no breaking the rules, and definitely no sex.

Torn between Promises One and Three, Shelby makes a decision — to exploit a loophole and lose her virginity before taking the vow. But somewhere between failed hookup attempts and helping her dad plan the ball, Shelby starts to understand what her mother really meant, what her father really needs, and who really has the right to her purity.

About the Author
Jackson Pearce is the author of Sisters Red, Sweetly, and As You Wish. She lives in Atlanta, Georgia.

SOURCE:  PUBLISHER
MY THOUGHTS
LOVED IT
This is a story about loss and love and what comes in between.  As Shelby’s mother is dying, she extracts three promises from Shelby:   “to listen to her father, to love as much as possible, and to live without restraint”. So far at age seventeen, she has had no real problems in following her mom’s advice.  She finds minor loopholes in the rules to stay true to them and so far it has worked. That is until her father becomes head of the Princess Ball committee where daughters promise their purity in all things.  Yes, including sex so she must find a major loophole in order to stay within the boundaries of the promises she made to her mother all those years ago while making a new one to her father.  She decides that if she looses her virginity before she makes the vow, she will be free and clear of that promise.


Shelby’s two best friends, Jonas and Ruby, are in on the plan and help devise a way for her to do the deed by making a list of requirements.  She first started making lists when her mother passed away and now has a sort of bucket list of things she wants to complete before she gets old.  Some of the things on her list are silly and some very meaningful.  They go from skydiving to putting flowers on every grave in her mother’s cemetery.  Her family and friends all note that Jonas is more to her than a BFF, but Shelby is clueless to the fact.  This part of the book was where I wanted to yell at her to open her eyes and see what was in front of her face.


This book should spark some great conversations between children and their parents.  Yes, even guys should read this book even though it is mostly directed at girls.  It points out some plain fact about kids these days that parents in their busy days probably never take the time to see.  They really need to have open discussions about sex.  I adored how the author used humor to get her points across.  Yes, there is frankness in this book, but nothing graphic.  I found it refreshing that the characters actually felt the ramifications about their decisions and that sometimes their choices were wrong but not the end of the world as some adults would like us to believe.