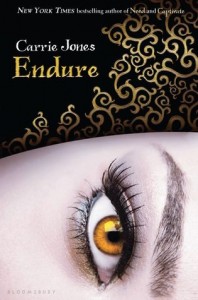 Publication Date: May 8, 2012 | Age Level: 12 and up
Rescuing Nick should have made all of Zara’s problems disappear. Bedford’s greatest warrior is back, not to mention Zara’s true soul mate. But it seems it isn’t enough. Nick isn’t enough. Bedford is being ravaged by evil pixies and they need much more than one great warrior; they need an army to stop the impended apocalypse. Zara isn’t sure what her role is anymore. She’s not just fighting for her friends, she’s also a pixie queen. And to align her team of pixies with the humans she loves will be one of her greatest battles yet. Especially since she can’t even reconcile her growing, heart-pounding feelings for her pixie king. . . . Unexpected turns, surprising revelations, and one utterly satisfying romantic finale make Endure a thrilling end to this acclaimed series.

About the Author
Carrie Jones is the New York Times and internationally bestselling author of the Need series, as well as After Obsession with Steven E. Wedel. She is a distinguished alum of Vermont College’s MFA Program, and a part-time police dispatcher in Maine because she likes cop stories. Really. She blogs about her dogs, cops, and a bit about writing too at www.carriejonesbooks.com.
SOURCE:  NETGALLEY – Publisher

MY THOUGHTS
ABSOLUTELY LOVED IT
Warning:  If you haven’t read Books 1-3 in the Need series, there are spoilers here!
Zara has rescued Nick from Valhalla and is now stuck in a Nordic myth.  She is also the prophesied bringer of the apocalypse according to Astley’s evil mother which continues the wars between the two factions of Pixies- both good and evil.  Since Nick has returned, Zara is more confused by his actions than ever since he has professed to love her no matter what, but when he realizes she is no longer human, he turns on her and calls her “soulless”.  Yes, my heart broke for Zara at that point.  After the last book, when Zara risks all to rescue him, he discards her.  OK, I was a bit shocked by Nick’s actions.
Frank, leader of the evil Pixies, is out to get Zara since he believes she can rid the world of all humans so the Pixies can rule the earth.  The ensuing tug of war between Astley and Nick in Zara’s heart is enough to break even the strongest girl.  Since Zara is now full pixie, she has grown used to fighting but still retains her pacifist ways.  She is still all about compromise and peace, but she is not afraid to kick butt if she needs to. She becomes closer to Astley while Nick is off sulking.  I don’t have any other way to describe his attitude, but I guess death can do that to a guy.  So in order to avoid the apocalypse, she drags her friends to Hel (not Hell — look it up!).  I was not very familiar with Norse mythology until I started this series.
All of my favorite supporting characters play important roles in helping Zara unravel the myth that surrounds this conclusion of the Need series.  It would be fun to see a spin off of Issie and the others.  As Zara brings in the whole high school to win over evil, she shows how much she has grown throughout this series.  Each book in this series builds upon the next and Jones really ties the whole thing together nicely with the last installment.  You really need to read these in order to get the whole story.  They are quick easy reads and should appeal to paranormal loving teens and adults with a bit of violence, a little romance (nothing graphic) and some great dialogue.