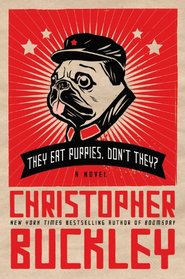 Publication Date: May 8, 2012
In an attempt to gain congressional approval for a top-secret weapons system, Washington lobbyist “Bird” McIntyre teams up with sexy, outspoken neocon Angel Templeton to pit the American public against the Chinese. When Bird fails to uncover an authentic reason to slander the nation, he and Angel put the Washington media machine to work, spreading a rumor that the Chinese secret service is working to assassinate the Dalai Lama.

Meanwhile in China, mild-mannered President Fa Mengyao and his devoted aide Gang are maneuvering desperately against sinister party hard-liners Minister Lo and General Han. Now Fa and Gang must convince the world that the People’s Republic is not out to kill the Dalai Lama, while maintaining Fa’s small margin of power in the increasingly militaristic environment of the party.

On the home front, Bird must contend with a high-strung wife who entertains Olympic equestrian ambition, and the qualifying competition happens to be taking place in China. As things unravel abroad, Bird and Angel’s lie comes dangerously close to reality. And as their relationship rises to a new level, so do mounting tensions between the United States and China.

Christopher Buckley, “the quintessential political novelist of his time” according to Fortune magazine, is the winner of the distinguished ninth annual Thurber Prize for American Humor. Tom Wolfe has described him as “one of the funniest writers in the English language.”

Buckley is the author of twelve books, many of them national bestsellers, including Thank You For Smoking, God Is My Broker, No Way To Treat A First Lady, Florence of Arabia, and the memoirLosing Mum and Pup.

Now how did I miss this one?  I have read EVERYTHING this author has ever written and I didn’t realize he had a new book!