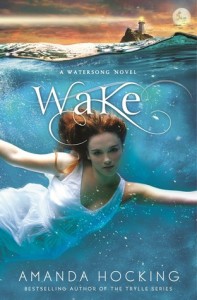 Fall under the spell of Wake—the first book in an achingly beautiful new series by celebrated author Amanda Hocking—and lose yourself to the Watersong.

Gemma seems to have it all—she’s carefree, pretty, and falling in love with Alex, the boy next door. He’s always been just a friend, but this summer they’ve taken their relationship to the next level, and now there’s no going back. Then one night, Gemma’s ordinary life changes forever. She’s taking a late night swim under the stars when she finds Penn, Lexi and Thea partying on the cove. They invite her to join them, and the next morning she wakes up on the beach feeling groggy and sick, knowing something is different.

Suddenly Gemma is stronger, faster, and more beautiful than ever. But her new powers come with a terrifying price. And as she uncovers the truth, she’s is forced to choose between staying with those she loves—or entering a new world brimming with dark hungers and unimaginable secrets.

AMANDA HOCKING is the author of the New York Times bestselling Trylle trilogy and six additional self-published novels. She made international headlines by selling over a million copies of her self-published books, primarily in eBook format.  She lives in Minnesota, where she’s at work on the next book in the Watersong series.

SOURCE: Around the World ARC Tours
MY THOUGHTS
REALLY LIKED IT
This would be a totally awesome slasher movie.  Yeah, that was my first impression.  The story centers around two sisters, each different, but still sisters.  Of course, like in true Disney fashion, the mother is gone, although in this case, the mother has survived a devastating car accident that left her with a brain injury and she has just reverted to acting like a fourteen year old. I think (hope) she needs to be developed a bit further in the next book since she is so whimsical, yet insightful.
Harper is the older one who runs the household taking care of her younger sister Gemma and the father, who is also pretty nonexistent again in Disney-like fashion. While Harper has to be strong to keep the family together and seems super OCD in running things just the right way, she is also pretty wise and sensitive.  She is *perfect* with a scholarship on the way, works part time at the library, cooks and cleans while watching out for Gemma. My wish is that she plays a stronger role in the next installment.
Gemma loves to swim and she is striving to make the Olympics as well as getting her own scholarship. She is sheltered by her sister and has pretty much bowed to her sister’s wishes in being a good girl.  While she is growing up, she has had a major crush on the boy next door, Alex who is a nerd.  When her affections are finally returned, she meets up with three girls who are vacationing on her small home island and things may fall apart.  These girls are movie star beautiful and they know it.  They also have an evil secret and need Gemma in order to survive.  Without going into major plot points here, just assume they get their way and Gemma is taken to the dark side in order to protect her loved ones.
OK, so far so good.  The girls are actually sirens (NOT all are necessarily mermaids) and need Gemma to survive, so she has been duly threatened and coerced to participate in their evil way of life.   All perfect parts of a good story with the best of B movies mixed in and you may find yourself screaming at Gemma, “Don’t go with those girls!”  just like you would at a movie screen.  I found the dialogue a bit forced, but the action made up for it.  There is violence, some drug references, a few kissed but nothing that hasn’t been seen in a good horror flick.  I think that the storyline has a good base in mythology and hope the next one doesn’t disappoint.